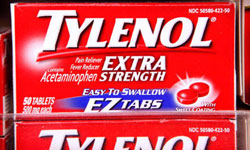 In 1982, the public's trust in packaged over-the-counter medicines was fundamentally shaken. How? Seven people died in the Chicago area after taking Extra-Strength Tylenol that had been laced with cyanide. The deaths caused enough panic among Americans that the Food and Drug Administration (FDA) began to require that all over-the-counter drugs be sold in tamper-resistant packaging.

Although one man was arrested and sentenced to prison for sending an extortion note to Johnson & Johnson, the makers of Tylenol, no one was ever arrested for the actual murders, and the case remains open. The widespread publicity given the case has led to some copycats, however.

The most notable of these came four years later, when a woman in New York died minutes after taking two Tylenol capsules that turned out to have been laced with cyanide. That same year, Excedrin joined its competitor as a vehicle for poison delivery. Two people in Washington State died after taking cyanide-laced Excedrin. In this case, however, the killer was uncovered. Stella Nickell -- the wife of the man who died from the poisoned Excedrin -- was found guilty of product tampering and sentenced to 80 years in prison [source: Bell]. Another copycat killer surfaced in 1993, when Joseph Meling attempted to kill his wife and actually killed two strangers by filling Sudafed capsules with cyanide. He was sentenced to life in prison [source: Snopes].

The Food and Drug Administration's current requirement that over-the counter medications be sold in tamper-resistant packaging is the direct result of the Tylenol-laced-with-cyanide killings -- and their copycats.