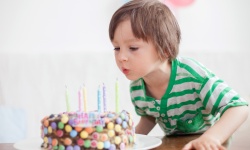 Make a wish when you blow out your birthday candles, and it might just come true — if you believe the superstition, at least.
tatyana_tomsickova/iStock/Thinkstock

There's nothing like a birthday to make you analyze your life. With another year gone, you think of how you've spent your time and vow to do better in the next year. For some, it's a time of deep rumination; for others, it's a time of renewal. Birthday superstitions can help drag you out of the birthday doldrums as you age, providing easy ways to boost your luck, find love and finally live the life you want before the next birthday rolls around. They also serve as the perfect way to help friends and family celebrate their special day and carry on traditions, many of which date back centuries. Before you celebrate your big day, check out these 10 birthday superstitions.

Some old Southern traditions in the United States suggest the candles on a birthday cake can help you with your love life. There should be one candle on the cake for each year of life, of course, and if you manage to blow them all out at once, you'll be married within a year. Missed a few? Don't worry; just get as many as you can. The number of candles remaining lit tells you how many years you have until your wedding day. If you're not looking to get hitched anytime soon, you might not want to blow too hard, just in case.

One of the most widely recognized birthday superstitions involves blowing out the candles on a cake, but this one has nothing to do with love and marriage. Instead, you're supposed to make a wish as you blow out the candles. If you get them all with one breath, your wish will come true — as long as you don't tell anyone what you wished for, of course. Obviously, this gets harder to do each year, as yet another candle gets added to the mix, so take a big breath to boost your chances for success. This custom may have originated in Germany, where people added an extra-large candle to the middle of the cake. Simply blowing out this larger candle meant your wish would come true.

In a move that would spook health professionals everywhere, some superstitions call for baking objects inside a birthday cake. Despite the choking hazard they pose to an unsuspecting party guest, these hidden objects actually bring luck, wealth and love to those lucky enough to find them. One such superstition involves adding a ring to the mix before baking the cake. The guest who gets the slice with the ring baked inside will be the next to marry. If that person is already married, the ring simply provides a boost of luck. Another tradition requires adding a dime to the mix before baking. Whoever gets the slice with the dime will end up rich.

When you run into a friend who has a birthday coming up, it's only natural to wish that person a happy birthday in advance. In some parts of the world, however, your seemingly innocent wish is supposed to bring bad luck down on the birthday boy or girl. In Russia, for example, you should never celebrate a birthday until the actual day of the event. If you can't do it that day, wait until afterward to avoid bad luck. In Germany, even wishing someone a happy birthday before the day of the event is bad luck. Just to be safe, some superstitious folks in that country don't give children any gifts until the day after their birthday.

What if you forget your birthday altogether? While it may seem unlikely, some say it's actually good luck if you honestly forget to celebrate your own birthday [source: Daniels].

While it's bad luck in some cultures to celebrate too early, some superstitions suggest that offering birthday greetings at just the right time brings luck. If someone in the family is celebrating a birthday, give that person a call first thing in the morning and say happy birthday to maximize luck. Prompt birthday wishes are particularly important when children are involved; in this case, birthday greetings should be offered as soon as the child wakes up, before any other activities have taken place. If you have young kids eager to open gifts, this probably won't be much of a problem. 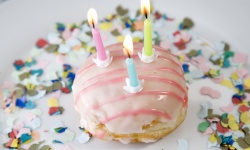 Eating a doughnut on your birthday and getting good luck from it doesn’t sound like such a bad deal.
Zoonar RF/Zoonar/Thinkstock

In some extremely lucky cultures, people are given the opportunity to become a kid again when they reach a certain age. When a man reaches the age of 61 in Japan, he enters his kanreki, or second childhood. He must wear a red hat and red vest to symbolize his return to childhood. From this point on, all his troubles are forgotten, and he is given the gift of a clean slate, or a rebirth of sorts. In Korea, this tradition occurs when you reach the age of 60. On that special birthday, people can return to the year they were born and essentially start anew.

Like the Americans and their tradition of birthday spankings, the Italians have a bizarre custom for celebrating a birthday by tugging on the ear lobe. The superstition stems from the idea that long ears are seen as a symbol that you will live a long life. To increase the length of the earlobes, at least symbolically, you should give your earlobe a slight tug for each year of life. You can also ask a trusted friend or family member to help with the tradition. Performing this ritual is said to bring good luck in life and in the year to come [source: Malossini].

A birthday might be a perfect day for cake, presents and a party, but there are some things you simply shouldn't do on your big day, at least according to superstition. For example, getting married on your birthday is a definite don't, thought to bring bad luck in love. While you're at it, avoid marrying anyone whose birthday is in the same month as yours, as it's sure to mean a stormy marriage. Luckily — maybe — your birthday is seen as an excellent time to die. Sure, you're dead, but dying on your birthday means your salvation is practically guaranteed, if that's any comfort.

Various cultures believe that noshing on certain foods on your birthday can bring luck, while others list certain foods you should avoid as you celebrate. In China, snacking on vermicelli brings good vibes, as does a nice meal of primroses. A cake shaped like a peach is also seen as a lucky symbol, while people in India believe it's bad luck to consume salt on your big day [source: Daniels]. The Pennsylvania Germans may have the most delicious rule regarding birthday cuisine; tradition requires you to eat a doughnut for luck on your birthday, which guarantees you will live another year.

Some superstitions claim that your personality can be determined solely by the day you were born. If you buy into this legend, you'll agree that being born on a Monday gives you good looks, while a Tuesday birth leaves you "full of grace." Other days of the week come with more negative qualities, such as woe, or a long way to go. It's likely that this superstition has Christian origins, since it saves the very best qualities for the child who enters the world on a Sunday [source: Webster]. Of course, there's absolutely no evidence that the day you're born has any impact on personality, no matter how catchy the poem.

After more than eight years as a writer, this was one of my most difficult articles to research. That definitely surprised me, as it seems like such a simple topic. The truth is, beyond blowing out the candles and making a silent wish, I knew of very few birthday superstitions. Sure, there are plenty of traditions out there, but many of them couldn't really be described as superstitions. In the end, I had to dig a little deeper into the past and incorporate both regional and international birthday superstitions. What drew me in while writing was the pure romance and nostalgia of baking a ring or coin into a cake — imagine if someone were to do that today — hello, lawsuit! I was also enchanted by the Asian custom of starting over when you reach a certain age. If it were up to me, everyone would get such a chance.