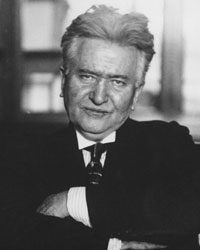 While serving as a Wisconsin district attorney in 1890, Robert "Fighting Bob" La Follette was offered a bribe by a Republican state leader in exchange for La Follette stopping a court case from indicting a group of fellow legislators [source: Wisconsin Historical Society]. Outraged by the display of political corruption, La Follette began a public career of speaking out against corporate and political dishonesty and leapfrogged from the governorship of Wisconsin in 1900 to the U.S. Senate six years later, a post he would hold for the rest of his life. Having earned a national reputation as a reform leader and an outspoken opponent of American involvement in World War I, La Follette ran for president in 1924 on the Progressive Party ticket. With 16.6 percent of the popular vote, La Follette nevertheless came in third to Democrat John W. Davis and the winning Republican Calvin Coolidge, who brought in 54 percent of the votes. La Follette died the next year.