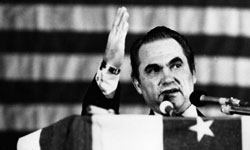 The year 1968 was a raucous enough, even without a presidential election. Race riots erupted in major U.S. cities, including Detroit, Baltimore and Chicago, and Martin Luther King, Jr. and Robert F. Kennedy were assassinated in April and June, respectively. During that time, Alabama Governor George Wallace's wife also died from cancer in the midst of his campaign for the White House [source: PBS].

Having famously declared "segregation now, segregation tomorrow, segregation forever," Wallace was running for president on the American Independent Party ticket, which staunchly opposed desegregation and withdrawal from the Vietnam War [source: Pearson]. Harping on racist fears of integration, Wallace performed well below the Mason-Dixon line and triumphed in five Southern states, capturing a sizeable 13.5 percent of the nationwide popular vote [source: Woolley and Peters]. But as Civil Rights tensions gradually eased, Wallace's anti-minority rhetoric lost its appeal in his successive presidential attempts in 1972 and 1976 [source: Pearson].