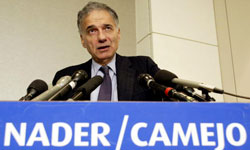 When Green Party candidate Ralph Nader announced that he was running for president in 2004, the response from the liberal end of the political spectrum wasn't necessarily celebratory. Four years earlier, Democratic leadership had encouraged Nader to drop out of the race to prevent the Green Party from potentially distracting voters from their candidate, former Vice President Al Gore. When Gore lost to Republican candidate George W. Bush by fewer than 1 million votes, some Democrats automatically blamed Nader for spoiling the election [source: Moore].

Running on a platform of government-sponsored healthcare, workers' rights and the Green Party's cornerstone of pro-environmental protectionism, Nader had snagged more than 2.8 million votes -- and an aftermath of outrage from the defeated Democrats.