by the Editors of Publications International, Ltd. & Matt Cunningham
Prev NEXT
5 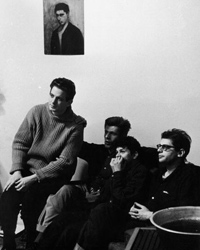 Some members of the Beat movement, like Allen Ginsberg (on the right, pictured with musician David Amram and fellow poets Peter Orlovsky and Gregory Corso), went on to be influential in the '60s cultural and political movements as well.
John Cohen/Hulton Archive/Getty Images

Every generation has its counterculture. For the 1950s, that came in the form of a black-clad, poetry-reading set: the beatniks. Beatniks were typically urban literary intellectuals who wrote and performed in acts of spontaneous creativity, often accompanying the spoken word with music. They encouraged people to freely express individual beliefs and desires. Much to the chagrin of the era's establishment, those beliefs often fostered anti-conformist tendencies, like experimentation with drugs, mysticism and sex.

The Beat generation left a lasting impression on America's arts and literature. Some of their most celebrated literary works include Jack Kerouac's "On the Road" (1957), Allen Ginsberg's "Howl" (1956) and William S. Burroughs' "Naked Lunch" (1959). These artists shunned traditional approaches to syntax, subject matter and vocabulary, preferring to play with language using street slang and inventive free-form verse that chaffed the rules of literary conventions [source: Thirteen/WNET New York].

Some historians credit the Beat movement with sowing the seeds of the flower power generation of the 1960s. The beatniks' dark berets, sunglasses and goatees were a far cry from the long hair, colorful clothes and psychedelic consciousness that came to define the era that followed the 1950s. But the alternative, rebellious lifestyles promoted by the hippie generation owe a debt of inspiration to the subversive creativity that the Beatniks promoted.