by the Editors of Publications International, Ltd. & Matt Cunningham
Prev NEXT
8 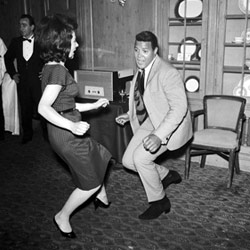 The King of the Twist himself, Chubby Checker, demonstrates his expertise.
Harry Hammond/V&A Images/Getty Images

A number of popular dances swept through the sock hops and soda fountain dance floors of the 1950s, including the hand jive, the stroll and the box-step. But it's fair to say that no dance fad captured the fancy of that era's teens quite like the Twist.

The Twist, though associated with the era, actually came late to the party: It originated in a Hank Ballard song in 1959, but didn't capture the spotlight until 1960, when music juggernaut Dick Clark released a recording of it by 17-year-old singer Chubby Checker. The rest, as they say, is history: Checker performed the song on Clark's show "American Bandstand," and it shot to the tops of both American and British charts.

The song proved to be a star-maker for Checker, who went on to star in Twist-themed movies and release a follow-up single, "Let's Twist Again," which earned him a Grammy. The original song was re-released in 1962 for a second round of pop success, and dancers born decades after the song's release are still apt to break into its signature moves when the classic comes on the radio [source: Botsch].