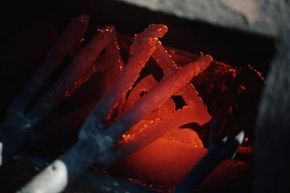 These irons are getting red-hot for some cattle branding. The procedure for branding people is not that different.
© Dewitt Jones/CORBIS

Human branding has a sordid past. In Colonial America, burglars had their hands branded with a "B" to mark them as thieves [source: Cox]. Drifters in 16th-century England were often branded on their chests with a "V" for vagabond, announcing their low social status. In that same era, English slaveholders might brand the cheeks of runaway slaves [source: Parman].

In so-called "civilized societies," human branding has almost always stood as punishment, but that's just part of the story. Some ancient tribal cultures used branding, and other "scarification" methods like cutting, in initiation rituals, often to mark young men as full, adult members of their tribes; in some areas of Papua New Guinea, the practice continues today [source: Guynup]. A number of all-black U.S. fraternities, too, have for decades practiced body branding to signify allegiance and brotherhood, though the practice is consistently condemned by their fraternal parent organizations [source: Battle].

Indeed, many body-modification outsiders see human branding as rather horrific, and most people are shocked to see burn scars in the shape of Greek letters – or in any obviously intentional design. Of late, though, the shock has begun to subside. As happened with face tattoos and ear stretching, the once rare, jarring body brand is slipping slowly into a more general "alternative" status.

A growing number of eager volunteers are paying professional body artists hundreds of dollars to be branded. Others, unwisely, are branding themselves and their buddies at home with the likes of wire hangers or soldering irons, saving money and dramatically increasing the risk of serious infection, all to bear the scar-tissue design of their dreams.

If they can bear the second strike, manage the complex aftercare, and endure the extended healing period, and if their bodies' response to burn damage is ideal for the intended aesthetic, the results can be striking. Still, with so many ifs, why not just get a tattoo?

Because the act of branding itself is a big part of the appeal. Of course, what exactly that appeal is depends a lot on who you ask.

The nature of an attraction to branding isn't easily defined. No two people come to the procedure from the exact same place. Still, it's fairly safe to say that at their core, attractions to any form of "body art" are also attractions to an "alternative" status. Branding, though, with its intense pain and association with disfigurement, may represent a more extreme distinction from the norm than other modifications.

Some point to the pain of the procedure as its primary appeal, noting the purposeful lack of anesthesia used in a process that, by most accounts, hurts intensely. And many people are attracted to pain, which can trigger the brain to release dopamine, the "pleasure chemical" often associated with addiction [source: University of Michigan Health System].

While most people who undergo body modification say pain is crucial to the experience, they would argue that's only part of it [source: Ward]. There is also the procedure's spiritual nature, its indication of devotion or the depth of its "abnormality."

A group calling itself the Church of Body Modification refers to body modification as a rite and states its mission as practicing that rite "with purpose, to unify our mind, body, and soul, and to connect with our higher power." The group considers body modification procedures and results as ongoing processes of self-discovery [source: CoBM].

The practice of branding in black fraternities (and some sororities) is one that signifies an extraordinarily deep commitment to the group. It's something that dramatically sets the branded members apart from the rest of society. Some black fraternity members also note a connection to their slave ancestors, who may have been branded as livestock by their owners (experts claim that slave branding, considered barbaric, was actually pretty rare in the Americas, though) [source: Battle].

And then there is the "abnormality" that is an end unto itself. Some people who choose to get branded may be looking to reflect their separateness from, not their involvement in society. Although it would be hard to argue against branding as an unavoidable initiation into a subculture – the body modification subculture. It's popular in some gangs and prisons too.

Branding differs in some noteworthy ways from other forms of body modification, perhaps the most interesting being that its results are unpredictable. The final appearance of a brand, the keloid scars that result from serious burns, depends more on the genes of the branded than the talent or technique of the brander, since everybody forms scars a little differently.

Sympathy for the Cattle

In October 2012, animal rights activists in Tel Aviv, Israel, staged a public branding to draw attention to the plight of dairy cows. Three protesters were branded with "269" in solidarity with a calf on a nearby farm who was branded with the numbers a few days after birth [sources: Macfarlane, Laylin].

Getting Branded: How It's Done 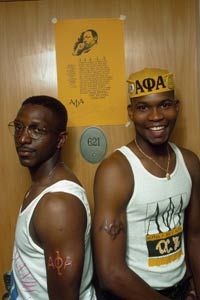 There are several approaches to branding (not counting the coat hanger). Possible tools include lasers, which use electricity to burn the burn designs into the skin; thermal cauterizers, wands that use electrically generated heat; and super-cooled metals, which produce burns by freezing the skin. The most common approach, though, is strike branding, which uses fire-heated metal [source: Knink]. This is the approach used in cattle branding. For humans, it goes something like this:

Scar tissue swells, so branding designs are typically pretty basic, lacking the tattoo-like intricacy that could be lost to the healing process. The brander usually draws the design onto the skin location and later traces it with the branding irons, which are usually a series of small pieces of metal in a variety of shapes. So a V branding would be two pieces of metal rather than a one V-shaped metal piece [source: Knink].

Sterile gloves for the brander and masks for both the brander and the subject are essential, since the fumes produced when flesh burns are unhealthy and smell unpleasant. Ventilation in the branding room is also recommended for these reasons [source: Foxx]. The brander should thoroughly sterilize the branding iron, and the area to be branded should be shaved and cleaned.

While exact procedures vary by artist, the brander typically heats the branding iron with a blowtorch. The iron must reach about 500 degrees Fahrenheit (260 degrees Celsius) to affect all three layers of skin: First the epidermis, then the dermis, and finally, the subcutaneous. The branding iron should burn through the first two layers and only graze the third layer [source: Parman].

The entire design is seldom applied in one strike. Instead, the metal is pressed to the skin in small sections, usually with some space in between each component because scar tissue will spread to fill in the gaps [source: Parman].

The brand is then cleaned, bandaged and wrapped in cellophane so no oxygen reaches it. Oxygen would speed the healing process, allowing the skin to repair itself. But the goal is scar tissue, not new, healthy skin. Bleeding and oozing are common, so many people cover the cellophane with a layer of medical tape so the fluids don't make a mess [source: Foxx].

What Could Possibly Go Wrong?

Once you get home with your new brand, you must clean your wound gently every day, coat it in an antibiotic ointment and add a new cellophane wrap. After about three days, as the skin begins to heal, you can add an irritant (like sugar) to hinder the production of healthy skin and encourage scarring. After about 10 days, stop the irritant and let your wound dry out and form a scab [source: Foxx].

After about a month and a half, some people disturb the wound by slapping or rubbing it to make the scar tissue more pronounced. Either way, it will take months for the wound to completely heal. In the meantime, experts recommend keeping the branded area away from any potentially germ-carrying substances, like bodily fluids [source: Foxx].

The complexity of branding aftercare underscores the risks involved in the procedure. As any burn expert will tell you, the possible complications associated with third-degree burns are not to be taken lightly.

The skin's three layers are the body's greatest defense against foreign invaders, and breaking through that defense leaves the body exposed to all kinds of contaminants. The big concern is infection. It's the most common cause of death among burn victims [source: University of Maryland Medical Center]. Being a volunteer instead of a victim doesn't change the potential harm.

Bacteria can enter through the wound at the time of branding or after the fact. Unsterilized equipment, dirty hands and sneezing can all introduce germs that cause serious health problems. Some people start taking prescription antibiotics before the procedure to shore up against this risk [source: Foxx]. But even with proper application and aftercare, infection remains a huge concern.

Improper tools, too, can cause damage in the form of metal poisoning. The coating on a wire hanger can easily flake off in the branding process, leaving potentially toxic foreign material behind [source: Skin Artists]. Technique plays a role, as well: An iron pressed too hard and/or too long on the skin can burn into layers of subcutaneous fat and muscle and cause permanent nerve damage [source: Kelly].

All of this makes branding one of the more risky forms of body modification which is perhaps why many colleges have rules against it, considering it a dangerous hazing ritual. In states like Florida, hazing is a felony, and students who participate in branding could potentially land in prison [source: Battle].

While there is no certifying body in the world of branding, many professional tattoo and piercing artists have also studied proper branding techniques. It's smart to research the artist's experience and training before letting him or her give you third-degree burns.

Writing about the "why" of any subcultural practice can be tricky. It's tempting to generalize, but that's usually a faulty approach. For instance, I once knew a woman who branded her pelvis after a miscarriage, in memoriam. Neither aesthetics nor "separateness" played into her decision. And in researching this article, I read about a Muslim man who wanted a tattoo but found it forbidden by his religion, so he opted for branding instead. I tried to avoid absolutes in the discussion of branding's appeal, which I hope readers will take as an overview of possible motivations and not a comprehensive or definitive list.