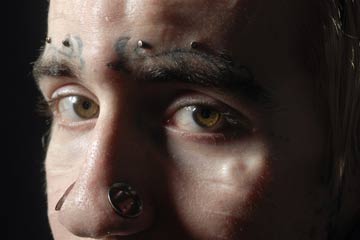 Pauly Unstoppable, one of the original three to undergo eyeball tattooing in Canada.
© Neville Elder/Corbis

Warning: If the idea of a tattoo artist sticking a hypodermic needle filled with ink into the white of someone's eyeball really, really grosses you out, you probably should skip the rest of this article and read something a little less unsettling. (The Baby Animals Quiz, for example).

OK, you're still reading, so you must not be that squeamish. So here we go. In a society where body modification increasingly has become a mainstream practice, it's getting harder to truly stand out. There was a time, a few decades ago, when merely having a torso covered with Japanese criminal-style tattoos or a metal stud through your lip would brand you a notable nonconformist. But after athletes, fashion models, college kids and just-divorced women started getting inked in the mid-1990s, you could tell that "body art" had gone mainstream.

A 2012 Harris poll found that 21 percent of American adults have a tattoo, including 38 percent of those between the ages of 30 and 39 [source: Harris Interactive].

That means tattoos don't really cut it for someone who really wants to stand out. Some turn to the ancient practice of scarification, cutting or branding their skin to display designs. But even that might not be outré enough. In 2007, a few particularly daring body-modification enthusiasts experimented with having the sclera — the white, protective outer layer that extends from the cornea to the optic nerve —injected with ink. While eyeballs had been tattooed before to conceal scars or injuries, this was the first time that it was done for cosmetic purposes [sources: Positano, MedlinePlus]. The procedure transformed the whites of their eyes into colored orbs with an otherworldly effect.

Since then, at least a handful of other people have gotten similar scleral tattoos. BME.com, a Web site for body modification enthusiasts, has published pictures of subjects with orange, red and green eyeballs [sources: Larratt, Larratt]. The Mirror, a British tabloid, reported that a 33-year-old man named Matt Whelan, who was billed as "Britain's most tattooed man," had the sclera around one of his brown eyes tattooed black [source: Fricker].

If scleral tattooing sounds kind of "out there" to you, well, it is. It's also extremely dangerous, medical authorities warn. Yet people do it anyway. In this article, we'll discuss the how and why.