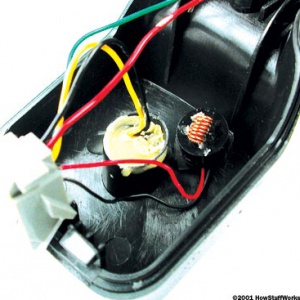 In the last section, we saw that the simplest wiretap is a standard telephone hooked into the wires of the outside phone line. The main problem with this system is that the spy has to stay with the phone in order to hear the subject's conversation. There are several tapping systems that get around this problem.

The simplest solution is to hook up some sort of recorder to the telephone line. This works just like your answering machine -- it receives the electrical signal from the phone line and encodes it as magnetic pulses on audio tape. A spy can do this fairly easily with an ordinary tape recorder and some creative wiring. The only problem here is that the spy has to keep the tape recording constantly to pick up any conversations. Since most cassettes only have 30 or 45 minutes of tape on either side, this solution isn't much better than the basic wiretap.

To make it functional, the spy needs a component that will start the recorder only when the subject picks up the phone. Voice-activated recorders, intended for dictation use, serve this function quite well. As soon as people start talking on the line, the recorder starts up. When the line is dead, it turns off again.

Even with this pick-up system, the tape will run out fairly quickly, so the spy will have to keep returning to the wiretap to replace the cassette. In order to stay concealed, spies need a way to access the recorded information from a remote location.

The solution is to install a bug. A bug is a device that receives audio information and broadcasts it through the air, usually via radio waves. Some bugs have tiny microphones that pick up sound waves directly. Just as in any microphone, this sound is represented by an electrical current. In a bug, the current runs to a radio transmitter, which transmits a signal that varies with the current. The spy sets up a nearby radio receiver that picks up this signal and sends it to a speaker or encodes it on a tape.

The bug picks up the electrical current that represents your conversation and broadcasts it to the spy's concealed receiving station.
HowStuffWorks.com

A bug with a microphone can pick up any sound in a room, whether the person is talking on the phone or not. But a typical wiretapping bug doesn't need its own microphone, since the phone already has one. If the spy hooks the bug up anywhere along the phone line, it receives the electrical current directly. Often, the spy will hook the bug up to the wires that are actually inside the phone. Since people very rarely look inside their phones, this can be an excellent hiding spot. Of course, if somebody is searching for a wiretap, the spy will be uncovered very quickly.

This is the best sort of wiretap for most spies. Bugs are so small that the subject is unlikely to discover them, and once they are installed, the spy doesn't have to return to the scene of the crime to keep them running. All of the complicated recording equipment can be kept away from the phone lines, in a concealed location. But since the radio receiver has to be within range of the transmitter, the spy must find a concealed spot near the wiretap. The traditional receiving spot is a van parked outside the subject's home.

Of course, hanging out in a van and listening to someone's phone conversations is completely illegal for a civilian. But the law for the government is a little murkier. In the next section, we'll look at the history of government wiretapping and find out about the issues involved in wiretapping today.