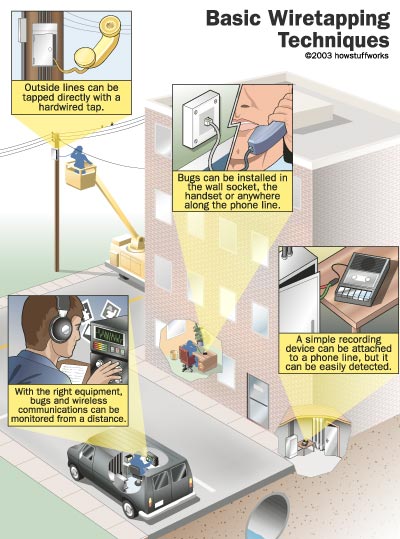 We've seen that tapping a wire is something like plugging an appliance into the electrical circuit running through your house. When you plug an appliance into the wall, the appliance draws power from the electrical current flowing in this circuit. The current in a phone line provides power as well, but it also carries information -- a pattern of current fluctuations that represents the air-pressure fluctuations of sound waves. A wiretap is a device that can interpret these patterns as sound.

One simple sort of wiretap is an ordinary telephone. In a way, you are tapping your own phone line whenever you hook up another phone in your house. This isn't considered wiretapping, of course, since there's nothing secretive about it.

Wiretappers do the same basic thing, but they try to hide the tap from the person they're spying on. The easiest way to do this is to attach the phone somewhere along the part of the line that runs outside the house. To configure a phone for tapping, the wiretapper just cuts one of the modular plugs (the part you insert in the jack) off a piece of phone cord so that the red and green wires are exposed. Then, the tapper plugs the other end of the wire into the phone and attaches the exposed wires to an accessible, exposed point on the outside phone line.

This sort of wiretap is easy to install, but it has some major drawbacks if you're a spy. First of all, a spy would have to know when the subject is going to use the phone so he or she could be there for the call. Second, a spy would have to stay with the wiretap in order to hear what's going on. Obviously, it's quite difficult to predict when somebody's going to pick up the phone, and hanging around a phone company utility box is not the most covert eavesdropping strategy.

For these reasons, spies will typically use more sophisticated wiretapping technology to eavesdrop on a subject. In the next section, we'll look at the main types of wiretapping equipment to see how spies listen in without blowing their cover.