Will a watermelon left out at night turn into a vampire? 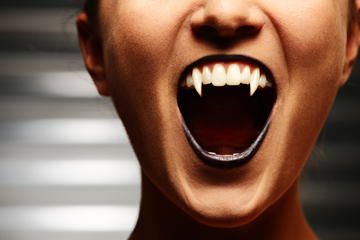 Leaving most fruits out overnight isn't a good idea, but what makes watermelons more frightening than others?
Kamil Macniak/Thinkstock

When Jennifer Grey's character Baby utters the line, "I carried a watermelon" in the cult 80s film "Dirty Dancing," we doubt she expected that melon to later turn into a vampire. (If she did, we're guessing it would have been a completely different movie.)

Believe it or not, though, some people believed -- and perhaps still do -- that if you leave a watermelon out overnight, it would turn into a terrifying vampire. Actually, not all that terrifying, but we'll get to that in a moment. Where on Earth did this legend come from?

Although passed down by gypsies (officially referred to as the Roma) in southeastern Europe for unknown generations, ethnologist Tatomir Vukanovic first documented the story of the vampire watermelon in the 1930s [source: Stewart]. Several versions of this legend exist and include not only watermelons, but also pumpkins.

The first version of the legend claims that watermelons and pumpkins will transform into vampires when they fight each other. We're not exactly sure what it looks like when watermelons and pumpkins fight, but we imagine it involves a lot of rolling around. Another legend says that these melons turn into vampires after being left out for more than 10 days, and a third says that vampires will take over the fruits if they're left out after Christmas. However, it seems that no matter how your watermelon turns into a vampire, it behaves the same way.

Here are the signs to look for to see if your watermelon or pumpkin has turned into a vampire. Your melon will start stirring and shaking, and then it will begin making a noise that sounds like "brrrl! brrrl! brrrl!" Sometimes you'll even see traces of blood on the rind. Vampire melons will apparently travel to houses and stables, harming people. Vukanovic isn't clear on what sort of harm, but he does state that most people weren't afraid of these Dracula-esque fruits [Perkovski]. Perhaps it's because these watermelon and pumpkin vampires have no teeth, or that you could probably give it a good, swift kick and then make your escape.

If your watermelon has turned into a vampire, have no fear. According to legend, to get rid of your bloodsucking melon you simply boil it, then scrub it with a broom. Don't forget to burn the broom afterward [source: Les Vampires].