Why was Marie Antoinette's wedding dress so scandalous? 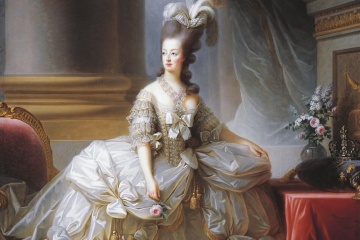 Poor Marie Antoinette. Trouble did seem to follow her, fairly or not. Consider the "let them eat cake" proclamation, the queen's alleged response after hearing that poor Parisians had no bread. While now there's serious doubt that Marie Antoinette ever really said those words, the statement's long been trotted out to demonstrate her supposed lack of concern for France's suffering masses. The nickname she earned in France does seem legitimate, though: "Madame Deficit," for her willingness to throw money at whatever she fancied [source: Durant].

It's hard out there for a primping dauphine, in other words, and Marie Antoinette probably didn't make it easier on herself. But when it came to the "scandal" her wedding dress caused, she wasn't to blame. Contrary to her reputation for frivolity and lavish spending, Marie Antoinette did nothing to encourage this minor gossip.

First, let's establish that Marie Antoinette was forced to play the part of the decadent royal, to a certain extent. When she first made her way from Austria to marry Louis XVI, she was re-dressed at the border of France to look like a French noble. Namely, she was primped, powdered, wigged and outfitted to the lavish expectations of the court [source: Weber]. The lesson was clear: You're in France now, lady. Act the part.

Her wedding gear (worn just days later) was no different. She was outfitted with an enormous white and silver dress, decorated with clumps of white diamonds to show her prestige [source: Weber]. Although — like most of Marie Antoinette's wardrobe — the dress no longer exists, it seemed to befit a queen, judging by descriptions of its wide pannier hips and striking silver color. There was just one small problem.

It was, in fact, small. Miscalculating her measurements, the dressmakers had constructed the gown so that it did not fit the new dauphine. No matter how tightly they tried to cinch the body of the dress, it didn't properly cover the lacing and shift poking out from the back, which meant there was a strange gap between the rows of diamonds.

There was little to do about it, however, since she was pretty much obligated to walk out of the door that moment, and there weren't swaths of pretty silver cloth around to fix the gap.

But all's well that ends well, right? Uh, perhaps in the short-term sense that she did get married. Not so much in the long term. It took Marie Antoinette and Louis seven years to consummate their marriage, and the story ends with her head chopped off. So let's give Marie Antoinette a little credit where we can: It was pretty darn brave of her to meet the crowd of snooty courtiers, dress half-done, on her wedding day.

How Friday the 13th Works
Hispanic or Latino? It’s Complicated
Who were les quatorziens?