Why is it bad luck to say certain words while fishing at sea? 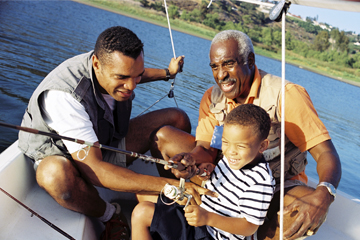 Some words are just off-limits, especially when you're out at sea.
BananaStock/Thinkstock

Gone are the days when sailors had to rely on only printed nautical maps and their wits to survive a voyage at sea. Today's seamen have all sorts of technology at their fingertips to make their journeys safer, but a trip at sea is still rife with danger -- especially if you're out in deep, choppy water. No wonder, then, that maritime superstitions dating back centuries still endure today. Who wants to risk it?

Among some of the many nautical superstitions out there (never enter a boat on your left foot, encountering a redhead before boarding the boat is bad luck, don't trim your nails on a boat) are several involving saying certain words out loud. Or, rather, never saying them out loud. Many sailors, captains, fishermen, and the like consider certain words and phrases very bad omens and believe that they should never be uttered on a boat. Sometimes you can reverse the bad luck with an action of your own, or sometimes you just have to brace yourself for possible disaster. Depending on how superstitious you are, you may have to cancel your voyage altogether.

Words you should NEVER say while out at sea include:

Some sailors think that the only way to reverse the curse of these words is by drawing blood. So don't be surprised if, after you make a nautical faux pas and utter one of these words, the captain of the boat punches you in the nose. It's just a safety thing.