Why is it bad luck to kill an albatross? 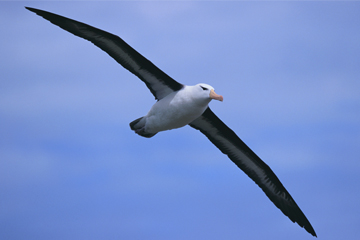 Death often conjures thoughts of superstition, but why are the deaths of albatrosses especially distressing?
Fuse/Thinkstock

Sailors have a plethora of superstitions to help them feel safe on the sea. Many of us follow superstitions in everyday life without even thinking about them, but maritime-related superstitions seem to be more common and enduring than others. Psychologists believe these superstitions -- avoidance of bad luck -- likely stem from the fact that taking to the sea is always risky, with so many factors out of a crew's control.

Most psychologists believe that superstitions evolve from that lack of control. Writer and psychology professor Stuart Vyse states that, "When something important is at stake yet the outcome is uncertain, then superstitions are likely to be used to fill the gap and make us feel more confident" [source: Lallanilla]. Even though we may logically know that a superstition really doesn't do anything, just performing the action makes us feel better.

One interesting maritime superstition is that it's very bad luck to kill an albatross. Because the albatross can fly long distances without flapping its wings, soaring up and down using surface winds to glide, sailors used to believe these birds were supernatural. They thought the albatross held the souls of lost sailors, so they held the sea birds in high respect. To kill one would bring bad luck to the crew and the ship [source: Wells].

And then, of course, there is Samuel Taylor Coleridge's classic 1834 poem "The Rime of the Ancient Mariner." In this epic ode, the narrator kills an albatross, bringing disaster and death to his ship and crew:

And I had done a hellish thing,

And it would work 'em woe:

For all averred, I had killed the bird

That made the breeze to blow.

Ah wretch! said they, the bird to slay,

That made the breeze to blow!

To punish him for killing the albatross, the crew makes the narrator wear the dead albatross around his neck.

Had I from old and young!

Instead of the cross, the Albatross

About my neck was hung.

The albatross remains around the narrator's neck until he blesses some water snakes, but he is cursed to carry the symbolic weight of the guilt around for the rest of his life.

Even as recently as 1959, a cargo vessel crew went on strike after transporting an albatross on board -- an albatross that died in its cage in transit. The main generator of the ship broke down, and the hot water and heating systems failed. The captain stated to a local newspaper, "That albatross may be to blame for the strike. I had courage bringing that ... thing on board." [source: Toledo Blade]