Browse the article Why Do Mass Shootings Keep Happening in U.S. Schools? 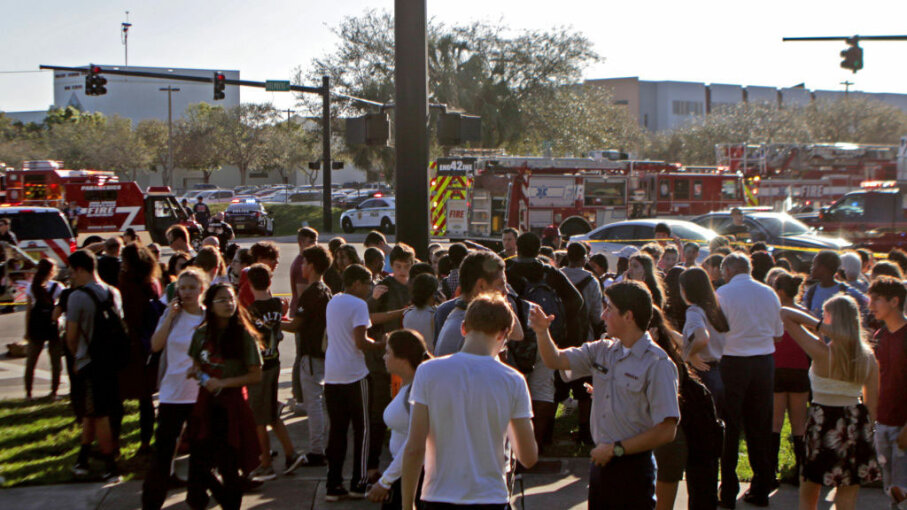 Students are released from a lockdown outside of Stoneman Douglas High School in Parkland, Florida after reports of an active shooter on Feb. 14, 2018. ohn McCall/Sun Sentinel/TNS via Getty Images

On Valentine's Day 2018, 17 people — including students and teachers— at Marjory Stoneman Douglas High School in Parkland, Florida, were killed by a 19-year-old former student. This was the 10th mass school shooting in the United States in the past five years. (A mass shooting is generally defined as one where at least four people are killed in a single incident.) And once again, Americans are asking themselves, why?

Lost in the noisy debate over gun control and mental health screening is another confounding question: why schools? Why do so many troubled young men choose schools as the place to act out their violent and vengeful fantasies? And what, if anything, can schools do to avoid becoming the next Columbine, Sandy Hook or Stoneman Douglas?

Bryan Warnick is a professor of educational ethics and policy at The Ohio State University who co-authored a paper on the meaning and motivations behind targeted school shootings. Even though many associate gun violence in America with poor, inner-city communities, mass school shootings almost always occur at upper-middle-class suburban schools. That's where the "status tournament" takes place, explains Warnick.

"Suburban schools do a lot of things to select winners and losers in ways that go way beyond academics," says Warnick, pointing to the adulation of athletics and the crowning of homecoming kings and queens. "The way we see it, when schools set themselves up as judges in the social status tournament, the resentment will sometimes be directed against the school itself."

He notes that in the book "Hollywood Goes to the Movies," sociologist and author Robert Bulman says that Hollywood films set in suburban settings focus on student journeys of self-discovery, while urban school films focus on heroic teachers and academic achievement. In the same vein, many suburban school shooters see what they are doing as acts of self-expression.

"There's a different value system at play in suburban schools; it's called 'expressive individualism,'" explains Warnick. "What we see in movies and TV is students engaged in this process of self-discovery, breaking through norms of the school, breaking through social cliques."

Self-discovery and individual expression aren't necessarily bad things, says Warnick. But for certain troubled young men who harbor deep resentment of the system that rejected them, there's no better way to express their true, tortured selves than through a dramatic act of violence. And the higher the body count, the more powerful the message will be.

Cheryl Jonson is a professor of criminal justice at Cincinnati's Xavier University where she has studied whether increased security measures — namely armed guards on campus, locked down buildings and metal detectors — are an effective means of preventing school shootings.

She found that although beefed up security may deter overall crime and violent crime in schools, there's little evidence to show that those measures alone can thwart a mass shooting. First, school shootings are just too statistically rare to gauge the efficacy of different security methods. And second, there's anecdotal evidence that even the best security methods can fail.

There were armed school guards at Columbine, says Jonson. The Sandy Hook shooter shot through glass panes to bypass locked doors. And in 2005, a student in Red Lake, Minnesota, passed through his school's metal detector before killing an unarmed guard who tried to stop him, five students, a teacher and then himself.

There's also concern that militarizing schools with armed guards and security checkpoints contributes to the idea that the school is an unsafe place where violence is almost expected. Jonson's 2017 paper (obviously written before the February 2018 Parkland incident) pointed out that the raw number of homicides at U.S. schools each year since Columbine in 1999 had actually decreased or remained stable over the years.

If You See Something, Say Something

One of the best ways to prevent school shootings, both Jonson and Warnick agree, is to encourage people to speak up when they suspect that a classmate, friend or family member is contemplating something terrible.

A day before the Parkland shooting, a grandmother in Washington State called 911 when she found her 18-year-old grandson's handwritten plans for a gruesome school attack involving homemade explosives.

"That's a school shooting we're not talking about today," says Jonson, citing a report from the Secret Service and the Department of Education that in 81 percent of school shootings, at least one other person knew about the plans. In 59 percent of shootings, two or more people had information about the attacks before they occurred.

"Usually when school shootings are prevented, it's when students trust the teachers enough to share that information with them," says Warnick. "If we could really build up schools as places of trust, where children feel like they have adults who care about them, that would facilitate the communication that's been proven to prevent school shootings."

When All Else Fails, Have a Plan

Of course, speaking up isn't always failproof. We now know the FBI received a tip about the Parkland shooter dating back to September 2017 for making disturbing comments on YouTube, but he was never detained or even questioned. A second person contacted the FBI on Jan. 5, 2018 to report their concerns, and warn them about the shooter's guns and desire to kill, but the FBI admitted the proper protocols to follow up were not followed.

That's why it's so critical, says Jonson, that schools train teachers, staff and students how to keep themselves safe in the unlikely case that there's an active shooter on campus.

"I don't want my life or my kids' to depend on whether or not a metal detector keeps somebody out," says Jonson, who is an instructor in the ALICE active shooter response method, which is used in many K-12 schools and college campuses.

The conventional approach to active shooter situations used to be a campus lockdown, in which classroom doors were locked and students were instructed to hide in a corner. But Jonson says that the lockdown method doesn't work well for open areas like cafeterias, and that huddled students are easy targets.

Now, most active shooter trainings emphasize three options: run, hide, fight. If you can get out, run. If you can't get out, don't just lock yourself into a classroom, but barricade the door with tables or desks. And if you find yourself face to face with a shooter, counter the attack in any way you can, by throwing things at his face or even swarming as a group.