Browse the article Why Do Colleges Hand Out Honorary Degrees? 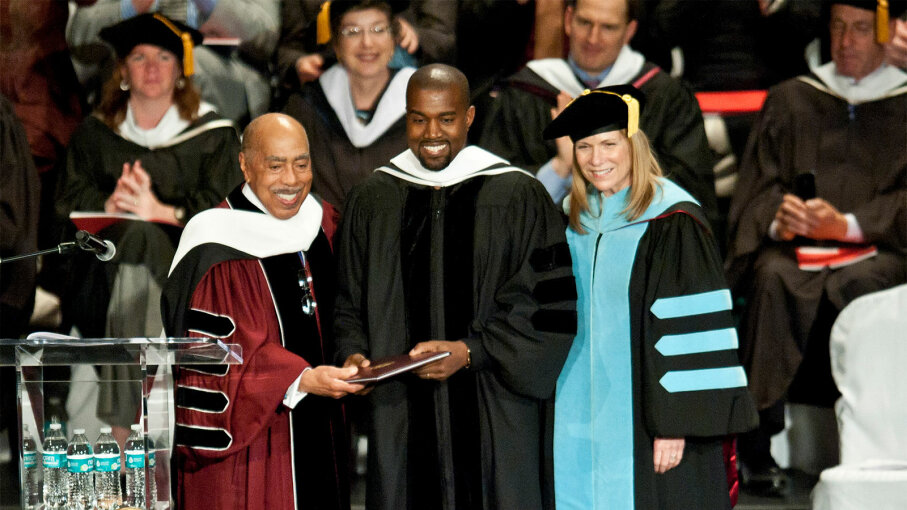 Call him Dr. West? Rapper Kanye West receives an honorary doctorate at the School of Art Institute of Chicago commencement ceremony on May 11, 2015. Timothy Hiatt/Getty Images

It's graduation season in America. And as proud college students and their parents crowd into sun-drenched football stadiums for two hours of speechmaking and endless loops of "Pomp and Circumstance," they could be forgiven for wondering why 30 minutes of their long-awaited graduation ceremony is taken up by wealthy donors, obscure academics and the occasional rapper in ceremonial robes accepting phony degrees.

The annual collegiate tradition of conferring honorary degrees has a long history and its fair share of critics, including Thomas Jefferson, who forbade the University of Virginia (UVA), which he founded in 1819, from handing out honorary degrees just to curry favor with bigshot businessmen and politicians. (That didn't stop Jefferson from happily accepting an honorary law degree from Harvard.)

Besides UVA, only MIT, Stanford and Cornell explicitly ban the practice of awarding honorary degrees in the U.S. William Barton Rogers, the founder of Massachusetts Institute of Technology (MIT) and a UVA alum, dismissed the practice of handing out honorary degrees as "unfriendly to true literary advancement" and "of spurious merit and noisy popularity."

For those universities that continue the practice, the upside of honorary degrees is obvious. As Arthur E. Levine, former president of the Teachers College at Columbia University told The New York Times in 1999, "Sometimes they are used to reward donors who have given money; sometimes they are used to draw celebrities to make the graduation special." Levine approved of honorary degrees, seeing them as teaching opportunities to"[show] examples of people who most represent the values the institution stands for."

The History of Honorary Degrees

American colleges and universities borrowed the tradition of honorary degrees from Europe, where respected universities like Oxford and Cambridge have been handing out paper doctorates in ceremonies called "Encaenia" (festival of renewal) since the 15th century.

The very first honorary degree on record was a brazen attempt to score points with a wealthy and politically connected bishop named Lionel Woodville. In 1478, Oxford delivered an unearned doctorate to Woodville's door and the influential bishop returned the favor by accepting a position as chancellor of the university.

By the 17th century, the practice of gifting honorary degrees to the rich and powerful had spun out of control with King Charles I handing out 350 Oxford doctorates to supporters and members of his court in a single year. Meanwhile, in the American colonies, Harvard University had its own reasons for conferring its first honorary degree. Believing that "only a doctor could create a doctor," Harvard gave the first American unearned doctorate in sacred theology to Increase Mather, its president, in 1692.

In 19th-century America, reported Malcolm Gillies, there was an outbreak of unearned Ph.D.s, rendering the new "doctor of philosophy" title virtually meaningless. It even became common practice for universities to hand out honorary medical doctorates, leading the president of the Northeastern Dental Association to warn in 1910 that "the most dangerous, delusive, debauching and degrading thing in American educational life...is the practice of granting unearned degrees."

Today, the conferring of unearned degrees is less of a menace to society and more of a savvy marketing opportunity. As Levine said, colleges choose to honor public figures, artists, activists, academics and yes, celebrities whose achievements reflect the values of the university. Most of the time honorees are required to collect their "doctorates" in person and deliver a few remarks to the graduating students. These often get reported in the press.

Uzoma Ayogu is a 2017 graduate of Duke University and a student body-elected young trustee on the college's board of trustees. Ayugo sits on the Committee on Honorary Degrees, which is charged with reviewing all nominations for honorary degrees submitted by Duke students, faculty and staff.

"Honorary degrees serve as a way to inspire the students graduating that day," writes Ayugo in an email. "Those receiving them should be symbols of the highest achievement in various areas of human accomplishment and graduates should feel that they can reach those heights. For those who receive them I imagine it feels good to be recognized for a lifetime of achievement in their field."

Competition for top names is fierce. Universities send out invitations at least a year in advance for big-name honorees like former presidents and A-list comedians. And the number of honorary degrees conferred each year seems to be swelling. According to analysis by Zachary Crockett at Priceonomics, in just the past 15 years, Harvard has doled out 64 percent of its total honorary degrees. And this is a school that's been around for nearly 400 years.

Boards of trustees need to be careful, though, because picking the wrong honoree can come back to bite you. Just ask the dozens of colleges and universities that bestowed honorary doctorates on Bill Cosby over the past four decades. At Yale, Cosby became the first to have his honorary degree rescinded in more than 300 years. Even Cosby's beloved alma mater, Temple University, pulled his honorary doctorate in 2018 after the comedian/actor was convicted of sexual assault. (Cosby did earn a doctorate in education from University of Massachusetts of Amherst in the 1970s.)

Does an Honorary Degree Mean You Get to Be Called 'Doctor'?

According to dozens of university policy statements reviewed by Grove City College psychology professor Warren Throckmorton, it is universally understood that an honorary doctorate does not give the recipient the right or privilege of calling themselves "Dr. Pitbull."

Florida Atlantic University doesn't pull any punches: "In no instance will the recipient of an honorary doctorate from Florida Atlantic University represent the award as being an earned doctorate or an earned academic credential of any kind... This award does not entitle the recipient to use the title of 'Dr.' or append 'Ph.D.' or any other earned degree designation after his/her name. Inappropriate use of the award could result in its withdrawal by action of the President and Provost, with the input of the University Faculty Senate Honors and Awards Committee."

While most honorary degree recipients understand and respect this distinction between an earned and unearned degree, others disagree. Benjamin Franklin famously referred to himself as Dr. Franklin after receiving honorary doctorates from Oxford and the University of St. Andrews (Harvard only gave him a master's degree).

More recently, the late author and activist Maya Angelou caught flack for adding "Dr." to her name after receiving numerous honorary degrees. "Wake Forest University, where she taught for many years, colluded in this ruse, referring to her in its obituary as "civil rights activist and professor Dr. Maya Angelou,'" wrote Mark Oppenheimer in The New Republic. "When I called the school to ask why it went along with this misdirection, a spokesman told me, 'That was her choice, to be called that.'"

Open-source software pioneer Richard Stallman, himself the recipient of 16 honorary doctorate degrees but nary an earned one, also has the habit of signing his emails "Dr. Stallman," but maybe just to mess with us.

Now That's Interesting
Even the Los Angeles Development Church & Institute, where you can straight up buy an honorary doctorate online, cautions its patrons to use the honorary title properly. "Honorary titles may be used outside of the academic field as long as it is made clear that they are not professional designations," says the organization's website.