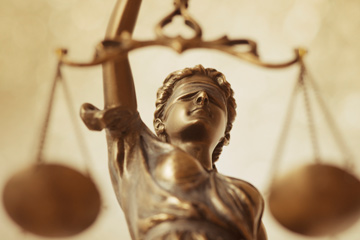 Justice is often depicted as blindfolded and holding scales to weigh each side of an argument.
Fry Design Ltd/Photographer's Choice/Getty Images

The word "justice" appears in many of the United States' most important documents, including the Declaration of Independence, the Constitution and the Pledge of Allegiance. But for a word that's used so often, its precise definition is still a topic of debate for philosophers, theologians and legislators.

Justice is often used interchangeably with the word "fairness." In any situation, be it in a courtroom, at the workplace or in line at the local bar, we want to be treated fairly. We shouldn't be judged more harshly because of our skin color, we shouldn't be paid any less because of our gender, and we shouldn't have to wait longer for a drink because of what we're wearing. We feel we deserve equal and impartial treatment.

Because we have this desire for equality and fairness, the assurance of justice is usually a prerequisite for a good society. For a leader to have legitimacy among his or her constituents, he or she must find ways to ensure that the laws of the land are just and administered justly. Of course, history is littered with examples of governments that were unjust to some citizens. One such example would be the era of slavery in the United States. Black people weren't afforded the same rights as white people, and it took many years for the government to recognize black people as whites' equals.

Such an example raises the question of what's to be done when an injustice is committed. Over the years, many black people have asked the government to make restitution for the years of unequal treatment that their ancestors received. When any crime or abuse is committed, we want justice, both for the offender and for the victim. For the offender, justice means that crimes don't go unpunished, but also that the punishment fits the crime. We treat a 13-year-old who stole a pack of gum differently than we treat a grown man who commits homicide, so justice has some flexibility in its administration. For a victim, justice may be seeing a criminal put behind bars, or it may be monetary -- the goal is to make the victim feel equal again.

If equality is an important component of justice, some have argued that governments should practice distributive justice, or the allocation of goods and wealth equally among all citizens. Such a theory has been denounced by those who believe that government should have a limited role in the economy. Countries with welfare systems, though, are practicing a form of distributive justice in that they demonstrate a commitment to providing equality in terms of basic well-being.

Justice remains a hard topic to pin down because people often disagree over what they deserve and whether they're receiving it. In such disagreements, we want reasonable and impartial decisions made, which is why the images of justice personified often include a blindfold. We want blind justice to the extent that such a thing is possible. And when people feel that they aren't getting their due, then society may become unstable. As proof, witness events like the French Revolution, civil rights marches and the fights over universal health care.