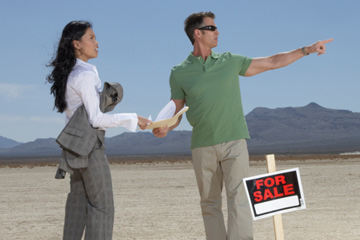 Do you see something where nothing exists? That's hope.
Chris Clinton/Stockbyte/Thinkstock

According to Greek mythology, the first woman on Earth, Pandora, was given a box that she was not to open under any circumstance. Too curious to resist, she opened it, and all of the evils of the world flew out: hate, pain, destructiveness, starvation. When Pandora saw what she had done, she closed the box before the last thing in there could escape. That last thing was hope.

Hope is the belief that circumstances in the future will be better. It's not a wish that things will get better, but an actual belief, even when there may be no evidence that anything will change. Hope can encompass a wide variety of beliefs -- everything from a high school student hoping for an A in algebra to a cancer patient hoping for a cure.

In some retellings of the story of Pandora, hope finally leaves the box and goes off to comfort the suffering. In other versions, hope remains in the box, and humankind is punished because of their disrespect to the gods. But if hope was in the box with all that malice in the first place, does that mean that it's evil? Many ancient Greeks thought fate was preordained, making hope a useless illusion. And Nietzsche agreed, claiming, "Hope is the worst of evils, for it prolongs the torment of man" [source: Time]. Hope is sometimes associated with denial; that cancer patient, for example, may have false hope if scientists are nowhere near finding a cure.

Though hope has been decried as useless, there is something endearing about its endurance when times are bleak. In Emily Dickinson's "Hope is the Thing with Feathers," the poet writes about hope as a bird that continues to sing despite not knowing the words, despite being stuck in a storm, despite the worst of conditions. Dickinson writes that the singing bird kept others warm, without asking for anything in return.

But if you were to look at hope through a biblical lens, you may find that hope makes demands after all. While hope provides joy, peace, protection and strength according to various scriptures, it also provides a way forward even when times are bleak. Barack Obama titled his first book "The Audacity of Hope," which is a phrase he heard in a sermon by Reverend Jeremiah Wright. Wright preached on a painting that featured a woman in rags and covered in wounds. Though her harp had only one string, she made music to praise God, and Wright said it was this act that was audacious. She could have just sat there, miserable, and wished for things to get better. Instead, when there seems to be no hope, making the choice to believe that there is indeed hope, and that there is indeed a better life ahead, is what God wants for us. Obama secularized Wright's message in his campaign, and urged voters to see that with different leadership, our own American dreams can be realized. And no matter the situation, a person can choose hope as a means of looking toward the future. Just as easily, however, hope can be left in Pandora's box.

What Does It Really Mean to Have an 'Existential Crisis'?
Why the Vatican Says No to Gluten-Free Communion Wafers
How Scientology Works