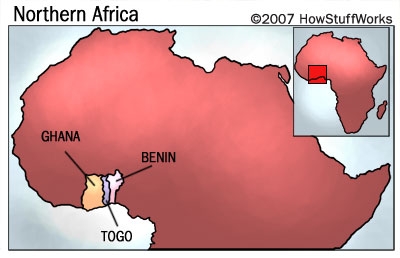 Voodoo originated in the African kingdoms of Fon and Kongo as many as 6,000 years ago. The word "voodoo" comes from the Fon language, in which it means "sacred," "spirit" or "deity." Other words used in Voodoo today also come from the Fon and Kongo languages. For example, a Voodoo priestess is often referred to as a mambo or manbo. This is a combination of the Fon word for "mother" or "magical charm" and the Kongo word for "healer."

The Fon kingdom was located in what is now southern Benin, a region some anthropologists refer to as the "cradle of Voodoo." People also practice Voodoo in Togo, Ghana and other countries in northwestern Africa. Approximately 30 million people in Togo, Ghana and Benin practice Voodoo today [source: National Public Radio: Radio Expeditions]. Voodoo is also an official religion in Benin, where as many as 60 percent of the people are followers [Source: BBC].

Since Voodoo is primarily an oral tradition, the names of gods, as well as the specifics of different rituals, can change in different regions or from generation to generation. However, African Voodoo has several consistent qualities no matter where people practice it. Along with the belief in multiple gods and spiritual possession, these include:

Many of these traits, particularly ancestor worship, polytheism, and the importance of music and dance, are also important in other African religions. So, in practice, Voodoo looks a lot like other traditional African religions. Many observances appear to be part celebration, part religious service incorporating rhythmic music, dancing and songs. Many rituals take advantage of the natural landscape, such as rivers, mountains or trees. Through decoration and consecration, ordinary objects, like pots, bottles or parts of slaughtered animals, become sacred objects for use in rituals.

In parts of Africa, people who want to become spiritual leaders in the Voodoo community can enter religious centers, which are much like convents or monasteries. In some communities, initiates symbolically die, spending three days and nights in complete seclusion before being returned to the outside world. Initiates learn the rituals, colors, foods and objects associated with different deities, as well as how to communicate with the loa. The spirits have different personalities and different requirements of their followers, much like the gods in Greek and Roman myths.

Some people associate Voodoo with evil, but many of its rituals, even those that include the sacrifice of live animals, focus on respect and peace. Its religious leaders become community leaders, providing guidance and settling disputes. Leaders also frequently provide medical care in the form of folk medicine. Priests, priestesses and other practitioners typically dedicate their work to helping and caring for others. Curses, witchcraft and spells designed to do harm fall instead into the category of bo. However, most anthropologists agree that Voodoo leaders have a working knowledge of bo, which is separate from Voodoo, believing that understanding how it works is necessary to fighting it. Sorcerers known as botono, rather than Voodoo priests and priestesses, are said to control more sinister spells. In some cases, though, people act as both priests and botono, depending on the situation.

This African form of Voodoo is a precursor to the Voodoo practiced in Haiti and other parts of the Western hemisphere. The regions of Africa where Voodoo has thrived are also areas that were heavily trafficked during the slave trade. Slavery brought Voodoo to the Americas. Next, we'll look at the changes to Voodoo that took place on the other side of the Atlantic.

The Babe with the Power

In many Voodoo communities, people consider twins to be sacred. According to the tradition, twins have two halves of the same soul. If one twin dies, the other will often carry a twin doll, believed to carry the deceased sibling's spirit. In Haitian Voodoo, twins have special powers that can be dangerous, and a ceremony to the loa Dossou prevents them from doing harm. In Benin, twins also symbolize fertility.