The Doctrine of Pre-emption and The Supremacy Clause 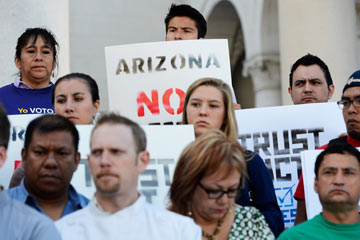 Activists and community leaders attend a rally and a news conference regarding the U.S. Supreme Court's decision on the Arizona immigration law in June 2012.
Kevork Djansezian/Getty Images

The law that applies to situations where state and federal laws disagree is called the supremacy clause, which is part of article VI of the Constitution [source: FindLaw]. The supremacy cause contains what's known as the doctrine of pre-emption, which says that the federal government wins in the case of conflicting legislation. Basically, if a federal and state law contradict, then when you're in the state you can follow the state law, but the fed can decide to stop you.

The operative term here, though, is "can."

Arizona's immigration law is a great example of the federal government fully enforcing the supremacy clause. When Arizona passed a very strict immigration law, the federal Justice Department sued them to overturn it under the supremacy clause. A spokesman from the Obama administration stated that the reason it went after Arizona is that the state law had international implications, especially in Mexico and the rest of Latin America. Proponents of the Arizona law said that the state was just enforcing federal law, since the feds would not do it and illegal immigrants were costing Arizona a lot of money. The case went all the way to the U.S. Supreme Court, where the Court overturned parts of the law and upheld others [source: Cohen]. Nevertheless, officials at the Department of Homeland Security said due to limited resources, it was not likely to step into illegal immigrant cases except high priority ones like those involving felonies [sources: Archibold, Cohen].

Probably the best litmus test for how the federal government will handle marijuana legalization in Colorado and Washington is to look at how it's handled legalized medical marijuana in other states.