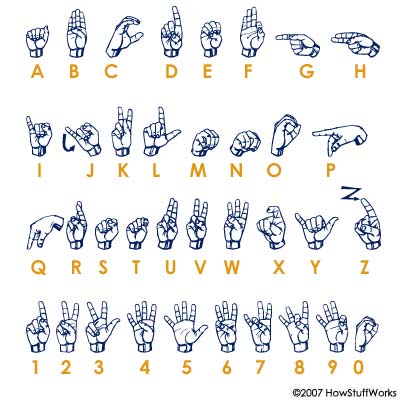 American Sign Language is a visual language that incorporates gestures, facial expressions, head movements, body language and even the space around the speaker. Hand signs are the foundation of the language. Many signs are iconic, meaning the sign uses a visual image that resembles the concept it represents. For instance, to express the concept of "deer" in ASL, you would hold your hands up to either side of your head, fingers spread, to represent antlers. Actions are often expressed through hand signals that mimic the action being communicated -- if you wished to sign the concept "eat," you would bring your fingers and thumb of your dominant hand together as if holding food and then move your hand toward your mouth.

The alphabet is an important series of signs. Some hand signs for letters resemble the written form of the respective letter. When you use the hand signs for letters to spell out a word, you are finger spelling. Finger spelling is useful to convey names or to ask someone the sign for a particular concept. ASL uses one-handed signals for each letter of the alphabet (some other sign languages use both hands for some letters). Many people find finger spelling the most challenging hurdle when learning to sign, as accomplished speakers are very fast finger spellers.

To express an ongoing action, such as "thinking," you would make the sign for "think" twice in a row. Some signs in ASL can serve as either a noun or a verb, depending on how you sign them. In general, you'd sign a verb using larger hand gestures and a noun by using smaller gestures that are doubled. At times, this can cause confusion. The sign for "food" is the same as doubling the sign for "eat," yet the sign for "eating" is also a repeated "eat" sign. In these cases, the receiver usually knows what you mean by the context of your sentences or the size of your gestures.

Almost any sign can be modified. Furrowing your eyebrows, tilting your head, puffing your cheeks or shifting your body are just a few ways that you can use to change the meaning of what you are saying. Any inflection that doesn't require your hands is called a nonmanual marker. An accomplished ASL speaker can convey a lot of information with only a few gestures coupled with nonmanual markers.

We'll look at the grammar of ASL next.