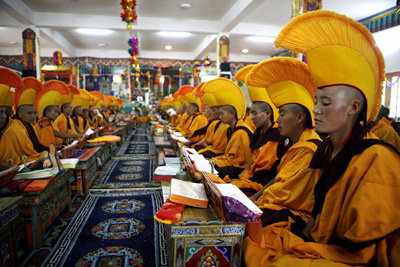 When Buddhism was established 2,500 years ago, it incorporated the Hindu belief in reincarnation. Although Buddhism has two major subdivisions and countless variations in regional practices, most Buddhists believe in samsara or the cycle of rebirth. Samsara is governed by the law of karma: Good conduct produces good karma and bad conduct produces evil karma. Buddhists believe that the soul's karma transmigrates between bodies and becomes a "germ of consciousness" in the womb [source: Encyclopaedia Britannica]. Periods of afterlife, sometimes called "the between," punctuate samsara, coming after death and before rebirth [source: NPR].

Like Hindus, Buddhists see unenlightened samsara as a state of suffering. We suffer because we desire the transient. Only when we achieve a state of total passiveness and free ourselves from all desire can we escape samsara and achieve nirvana, or salvation. Many Buddhists believe an individual can end the cycle of reincarnation by following the Eightfold Path, or middle way. An enlightened being embodies the directives of the Eightfold Path: correct view, correct intention, correct speech, correct action, correct livelihood, correct effort, correct mindfulness and correct concentration.

The Buddha Siddhartha Gautama taught the Eightfold Path in his first sermon after attaining enlightenment. Siddhartha, who was born around 563 B.C. near modern-day Nepal, had an extravagant and privileged youth. As a young man, he began to question his spiritual state amid such luxury and reverted to the life of an extreme ascetic. When his hermitic life brought him no closer to enlightenment, Siddhartha decided to pursue the middle way -- a state of existence between excess and self-deprivation. Shortly thereafter, Siddhartha reached enlightenment.

Of course, reincarnation is not restricted to Eastern religions. In the next section, we'll learn about the ancient Greco-Roman understanding of reincarnation.