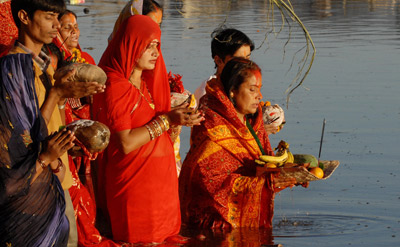 The Hindu religion is vast and varied. Its adherents worship an array of gods and celebrate diverse traditions. Yet Hinduism, the world's oldest surviving religion, is unified by its acceptance of samsara, a chain of births and deaths linked by reincarnation. Controlling samsara is the law of karma. Hindus believe that all individuals accumulate karma over the course of a lifetime. Good actions create good karma and evil actions create negative karma. Karma is not assigned or regulated by any god; it's simply earned by an individual and passed down through subsequent lives.

But while good karma can eventually earn a person a higher place in the caste system in a future life, the ultimate goal of any Hindu adherent is moksha, or salvation from samsara. Moksha is the final of four primary Hindu goals. The first three -- kama, artha and dharma -- concern earthly pursuits like pleasure, power or well-being and virtue.

Ironically, to achieve moksha, you must make a deliberate effort to not want it. Salvation comes only after a person has abandoned all pursuits and desires and accepts that the individual soul is the same as Brahman, the universal soul or god. By exiting the cycle, an individual no longer endures the pain and suffering of earthly existence performed countless times over.

The belief in reincarnation is also predominant in two prevalent religions from India: Jainism and Sikhism. Jain adherents believe the soul accumulates karma as an actual physical substance, unlike the conceptual Hindu idea of karmic law. As long as the soul is burdened by karmic particles, it must bind with a body, initiating a series of rebirths. Only when a soul is free from all karma can it exit the cycle of reincarnation and join other disembodied souls in a state of perfection. However, because Jain followers believe that deliverance is currently impossible, devoted adherents simply pursue purification.

Sikhism also teaches reincarnation. Like Hinduism, the law of karma influences the quality of Sikh life. For Sikhs to exit the cycle of birth and rebirth, they must achieve complete knowledge and become one with God.

Reincarnation is perhaps best known as an aspect of Buddhism. In the next section, we'll learn about the Buddhist understanding of samsara, karma and the Eightfold Path.

The Wheel is Turning

Jains compare time to a wheel with six spokes. The wheel's first three spokes represent Jainism's golden age; the final three spokes represent the religion's decline and eventual extinction before rebirth. Because we are currently in the period of decline -- between the fifth and sixth spokes -- Jain adherents believe that it is currently impossible to reach enlightenment.