Browse the article How do caucuses work? 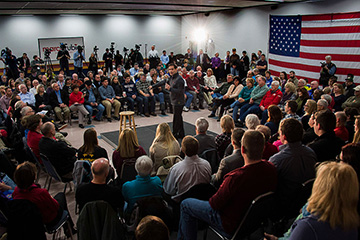 Presidential election primaries and caucuses are two very different methods of accomplishing the same basic thing. Simply put, they are both a means for each political party to let vote­rs nationwide select their party's presidential nominee. More specifically, primaries and caucuses are means of selecting delegates (representatives of party members in each state) to send to the party's national convention.

­ At each party's national convention (held the summer before the presidential election), the party selects a presidential nominee based on how party delegates at the convention vote. The Republican and Democratic parties in each state select delegates based on either caucuses or a primary vote in that state -- the delegates are sent to represent voters in the state.

­At the Democratic convention, the number of state delegates is proportional to the number of votes received in the state primary or caucus. The Republican Party allows states to use either a winner-take-all system (where the delegate or candidate with the most votes in a state's primary or caucus wins the right to be represented by all of the party's delegates at the national convention), or a proportional system. (States that hold early primaries must use a proportional allocation.)[source: GOP].

Federal law doesn't dictate how states choose their delegates, so individual states decide what system to use. Most states use the primary system -- where voters statewide simply cast a vote for the candidate they support -- but some use the older caucus system.

The term caucus apparently comes from an Algonquin word meaning "gathering of tribal chiefs," and the main crux of the caucus system today is indeed a series of meetings. To see how this works, let's look at the Iowa caucuses -- the first "voting event" of the presidential election year. 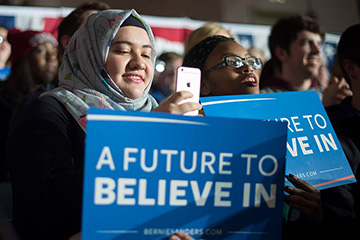 A supporter of Democratic presidential candidate Bernie Sanders listens during a campaign event at the University of Northern Iowa in Cedar Falls, Iowa, Jan. 24, 2016, ahead of the Iowa Caucus.
JIM WATSON/AFP/Getty Images

In Iowa, the caucuses themselves are local party precinct meetings where registered Republicans and Democrats gather, discuss the candidates and vote for their candidate of choice for their party's nomination (Iowa caucuses actually occur every two years -- in non-presidential-election years, participants generally discuss party platform issues). In both parties, the purpose of the caucus vote is to select delegates to attend a county convention -- each caucus sends a certain number of delegates, based on the population it represents. The delegates at the county convention in turn select delegates to go to the congressional district state convention, and those delegates choose the delegates that go to the national convention.

The Republican caucus voting system in Iowa is relatively straightforward: You come in, you vote, typically through secret ballot, and the percentages of the group supporting each candidate decides what delegates will go on to the county convention.

The Democrats have a more complex system -- in fact, it's one of the most complex pieces of the entire presidential election. In a typical caucus, registered Democrats gather at the precinct meeting places (there are around 1,700 precincts statewide), supporters for each candidate have a chance to make their case, and then the participants gather into groups supporting particular candidates (undecided voters also cluster into a group). In order for a particular group to be viable, they must have a certain percentage of all the caucus participants. So participants will try to convince their neighbors to join their group. If they don't get enough people, the group disbands, and its members go to another group. The percentage cut-off is determined by the number of delegates assigned to the precinct. It breaks down like this:

If the precinct has only one delegate, the group with the most people wins the delegate vote, and that's it.

Once the groups are settled, the next order of business is to figure out how many of that precinct's delegates each group (and by extension, each candidate) should win. Here's the formula:

­For example, say a precinct has four delegates, 200 caucus participants, and 100 people support John Doe. To figure out how many delegates you assign to John Doe, you would multiply 100 by four, to get 400. You divide 400 by 200 and get 2. So John Doe gets two of the four delegates.

The media reports the "winner," based on the percentage of delegates going to each candidate. This isn't exactly accurate, since it's actually the state convention that decides what delegates go to the national convention, but more often than not, there's a clear statewide winner after the caucuses.

The convoluted caucus system dates back to 1796, when American political parties emerged, and it hasn't changed a whole lot since then. Most states eventually replaced this system, because as political parties became more centralized and sophisticated in the early twentieth century, party leaders or "bosses" were perceived as exerting too much control over choosing a nominee. To give individual voters more influence over the nomination process, party leaders created the presidential primary system. Florida held the first primary in 1901 marking the beginning of the presidential primary we know today.

Dramatic caucus reforms and rules that the Democratic Party instituted at the state level in the 1970s changed the system significantly. Designed to improve and open up caucuses to all party members, the requirements actually made caucuses more difficult to manage and inadvertently led to the rise of primaries. To help states coordinate the election days of both parties, the Republicans also changed their system.

You can learn more about the United States democratic process by reading the links on the next page.