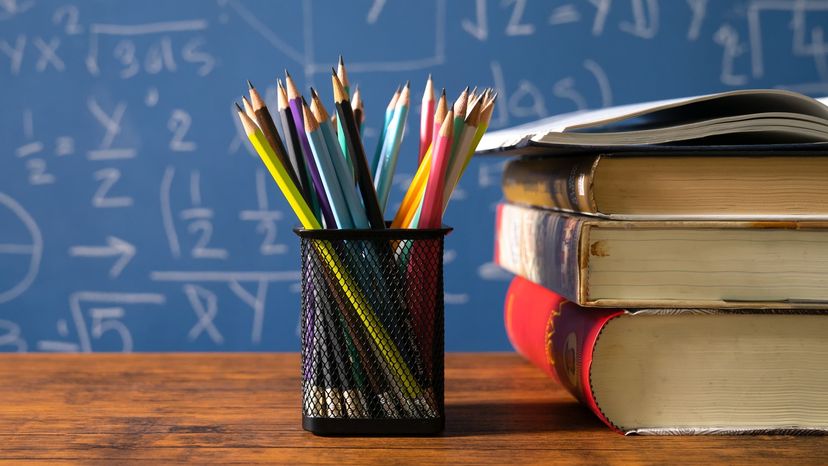 As much as children grumble about going to school, it is absolutely essential to their development. It is there that they learn to read, write, add and subtract, and understand history. They also learn how to get along with their peers, and they develop the skills that will one day help them succeed as adults.

By far, the majority of children in the United States-almost 50 million of them- learn all of these things at public schools. In this article, we will look at how public education began in this country, see some of the challenges modern public schools face, and find out just how much money goes into teaching America's children.

The History of Public Schools in America 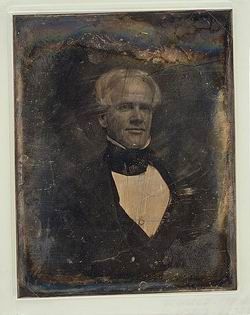 Hundreds of years ago, most learning happened at home. Parents taught their children or, if their families could afford it, private tutors did the job. The Puritans were the first in this country to point out the need for some kind of public education. They established schools to teach not just the essentials-reading, writing and math- but also to reinforce their core values.

After the American Revolution, Thomas Jefferson argued that the newly independent nation needed an educational system, and he suggested that tax dollars be used to fund it. His pleas were ignored, however, and the idea for a public school system languished for nearly a century.

By the 1840s, a few public schools had popped up around the country in the communities that could afford them. However, that smattering of schools wasn't good enough for education crusaders Horace Mann of Massachusetts and Henry Barnard of Connecticut. They began calling for free, compulsory school for every child in the nation.

Massachusetts passed the first compulsory school laws in 1852. New York followed the next year, and by 1918, all American children were required to attend at least elementary school.

Next came the movement to create equal schooling for all American children, no matter what their race. At the turn of the 20th century, schools in the South, and many in the North, were segregated. The 1896 Supreme Court ruling, Plessy v. Ferguson upheld the legality of segregation. Finally, in 1954, the Supreme Court overturned its ruling with the landmark case, Brown v. Board of Education, and public schools became open to people of all races.

Public schools are operated at the state level through departments of education, and locally by school districts and publicly elected or appointed school boards. Approximately 15,000 different school districts operate in the United States, and most are run by counties. Because there is very little federal oversight, curricula in one state can differ from those in other states.

Students generally go to the public school in the district in which they live; however, with the growth of charter and magnet schools, students are now being offered more options. Public schools generally accept everyone who wants to go there, regardless of their income or skill level.

Here are a few quick statistics about public schools:

Who Pays for Public Schools?

Spending on elementary and secondary school students has risen dramatically throughout the past several decades. Back in 1959, schools spent only $2,101 per student. In the 2007-08 school year, by comparison, schools will have spent nearly $10,000 per student. The projected annual total spending on public elementary and secondary schools for the 2007-2008 year is $489.4 billion.

Property taxes pay for most of the cost of public schools. Although public schools get a very small percentage of their funding from donations and parent and student fundraising efforts, by far the greatest proportion of the money comes from state and local governments. The federal government contributes less than 10 percent of the cost.

Because public schools accept everyone in a given geographical area, they must contend with problems such as violence, high dropout rates, overcrowding, and even poor teacher retention. Here is a breakdown of just a few of the issues that plague public schools:

A 2002-03 study found that only about 70 percent of eligible high school seniors graduate from high school each year. This translates into about 1.2 million high school dropouts annually. Dropout rates are highest among minority students. The five states with the highest graduation rates are [source: NCHEMS Information Center]:

And the five states with the lowest graduation rates are [source: NCHEMS Information Center]:

Most of the dropouts say they leave school because the work is too difficult, or too boring. Some states are considering raising the legal dropout age to attack the problem. Others are proposing to give dropouts the opportunity to complete their high school education at community colleges with their peers. Other strategies include increasing parental involvement and helping students feel more engaged and challenged while in high school.

School violence is on the rise in this country. You can get an idea of what acts of violence are being perpetrated on school grounds by looking at the “Indicators of School Crime and Safety, 2004-2005” report, Here are a few statistics from the 2004-05 school year published in that report:

Strategies for combating school violence include instituting safety policies and emergency procedures at each school, creating an environment in which students feel comfortable reporting incidents, and establishing and enforcing clear rules of student conduct.

By 2010, there will be an estimated 2.2 million teacher vacancies in this country, and not enough people to fill them. Attracting and retaining teachers is hardest in poorer urban areas (where new teachers stick around for an average of only five years), and in subjects such as math, science and foreign languages. Low salaries, poor working conditions, and a lack of on-the-job training and support are cited as the main reasons for the high turnover rates.

In an effort to attract and retain good teachers, many school districts have started incentive programs. Some offer better pay to teachers willing to work in high-poverty areas or in hard-to-staff subjects. Others pay for performance, giving bonuses to teachers whose students show measurable academic gains. Still, others give perks such as signing bonuses, mortgage subsidies, and flexible work schedules. Some schools offer mentoring programs, which both encourage new teachers and help them meet the challenges of their new job.

No Child Left Behind 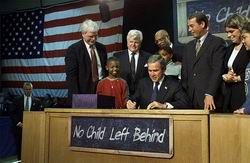 In 1983, a report entitled “A Nation at Risk” made waves in the educational community when it suggested that other countries were far outperforming American schools. As a result, many parents and educators demanded school reforms and greater accountability.

In 2002, President George W. Bush signed the No Child Left Behind Act, a controversial measure that was designed to increase public school accountability. It requires schools to test students in reading and math each year in order to identify poorly performing schools. Schools that fail must allow students to transfer to better performing schools. Failing schools have to make improvements by hiring new teachers and/or changing curricula, or they risk being taken over by the state.

Supporters of the Act say that it holds schools accountable for their performance, and gives parents greater choice when their schools aren’t living up to standards. Opponents say the No Child Left Behind Act forces schools to “teach to the test,” focusing primarily on the core subjects of reading and math at the expense of other areas of study.

While some kids are packing up their duffel bags and getting ready to ship off to summer camp, others are heading back to school. Many schools are moving to a year-round program, following the philosophy that the long summer break in the traditional school year gives kids too much time away from learning and puts them at an educational disadvantage.

Even though they're structured differently than nine-month schools, year-round programs don't actually give kids more time in the classroom. They run for 180 days, just like traditional school programs, only the school year is shifted. Year-round schools that are on a single-track stay open all year, but instead of having a summer break, they have several three- or four- week breaks scattered throughout the school year. Multi-track schools work on a shift basis in order to accommodate greater numbers of students. Children are assigned to different "tracks," which are staggered so that some children are on vacation while others are in school.

Currently, there are 3,000 year-round schools in the U.S., of which the majority are public schools. Proponents argue that students in year-round schools score higher academically, but opponents say the practice disrupts children's summers and costs communities extra money.

For much of the 20th century, parents really had only two choices—either send their children to the public school in their district, or pay for private school. Today, however, the growth of charter and magnet schools has increased the number of publicly funded educational opportunities available to students.

The term “charter” is believed to have come from a New England teacher named Ray Budde, who suggested in the 1970s that local school boards give teachers “charters,” with which to try different teaching approaches. In the late 1980s, the city of Philadelphia began experimenting with a charter school model inside its existing public schools.

The first charter school opened in Minnesota in 1992. That same year, California passed its own charter school law. By 2003, 40 states had charter laws on the books. In 2005, the national Charter School Program had issued almost $217 million in grants for charter schools. Today, there are more than 3,000 charter schools across the nation, serving nearly 900,000 students.

Typically, parents, community leaders, teachers, or school districts submit a proposal to create a charter school. Once the charter is approved by the local school board or state board of education, the U.S. Department of Education provides grants to pay for the school planning and implementation.

Although publicly funded, charter schools have far more autonomy than do other public schools. They can tailor their programs to the needs of the community, rather than adhering to state or national guidelines. Also, they can teach in more innovative ways than traditional public schools. Although charter schools technically accept every student within their area of coverage, they sometimes will hold a lottery if the number of interested students exceeds the available slots.

Each school outlines its mission, program, goals, students, and assessment methods in its “charter.” Most charters are granted for a period of three-to-five years. During that period, the school has to prove to the school board or board of education that it has achieved academic results. If not, the charter can be revoked. Between 1991 and 2004, about 400 charter schools were forced to close.

Magnet schools were designed to encourage racial integration by incorporating students from different communities within the same area. These schools are usually regulated to make sure they have a good balance of students from all ethnic backgrounds.

Magnet schools often focus on a particular area or skill set, such as gifted and talented, math or science. Principals are given greater control over curricula than are principals in traditional public schools. Magnet schools also can be more selective, accepting or rejecting students on the basis of academic ability and/or behavior.

Magnet schools are funded by federal and state grants, local school boards, corporate contributions, and sometimes tuition. As of 2001-2002, there were 3,100 magnet schools in the United States.

For more information on public schooling and related topics, check out the links on the following page.

Up Next
Homeschooling
Explore More 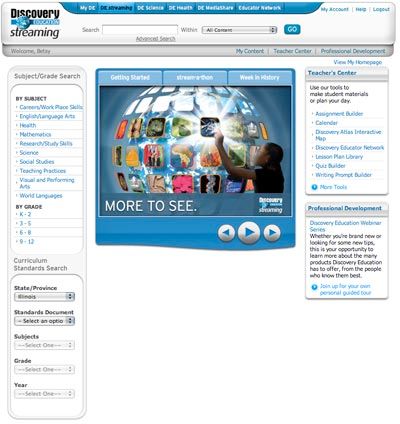