by John Donovan May 23, 2019
The Secret Service coordinates with state, local and federal authorities in determining the composition of a presidential motorcade. Ashley Landis-Pool/Getty Images

Nothing snarls big-city traffic quite like a politician headed to another ribbon-cutting or campaign stump speech. Lights flashing, flags fluttering, sirens blaring, traffic-light ignoring. It's a commuting Armageddon, no matter which side of the political aisle (or city street) you happen to be stuck on.

The granddaddy of these, of course, the jam de resistance, is the presidential motorcade. When the U.S. president comes to town, it's time to get off the roads. As fast as you can.

The President's In Town

Ever since that day nearly 117 years ago when Teddy Roosevelt reportedly became the first president to use a car in an official capacity, parading through the streets of Hartford, Connecticut, everybody's been moving aside to let the Commander in Chief through. From The New York Times on Aug. 22, 1902:

On his arrival at Hartford the president was welcomed by a committee of representative citizens, and then taken for a drive around the city, occupying, with Col. Jacob L. Greene, a handsome victoria automobile, in charge of two expert New York chauffeurs. He was enthusiastically cheered all along the route.

(Earlier, the Rough Rider had landed, by yacht, in New Haven and taken a carriage ride through that city. "By proclamation of the Mayor, all traffic over the line of march was suspended," The Times reported. "The city's factories changed the noon hour for the day and the shops were closed between 1 P.M. and 2:30 P.M. The city was gayly dressed in flags and bunting.")

Presidential motorcades always have had an undeniable patriotic panache, even in Washington, D.C., where other motorcades (ferrying visiting dignitaries, diplomats, cabinet members and the political alike about) are pretty passé. The presidential inaugural parade, featuring the presidential motorcade, is a red-white-and-blue happening, even as almost every president since Jimmy Carter in 1977 bolted from their limos to hoof it down Pennsylvania Avenue on foot, at least for a bit.

Any presidential motorcade, whether in D.C. or another town, must carry off a kind of automobile ballet to get the president safely to his destination.

Those unforeseen circumstances can be the stuff of tragedy and history. John F. Kennedy was assassinated riding in a presidential motorcade in Dallas. An assassin shot Ronald Reagan as he prepared to get into his limo in a motorcade in D.C. Gerald Ford had to be shoved into his limousine twice in the space of two weeks in California — once in Sacramento, once in San Francisco — to avoid assassination.

That's why the Secret Service doesn't mess around when it comes to presidential motorcades.

The Make-up of a Motorcade

McKenzie points out, carefully, that the Secret Service coordinates with state, local and federal authorities in determining the composition of a presidential motorcade. Often, how well-equipped the local force is determines how many vehicles are involved.

"Motorcades are comprised of numerous types of vehicles belonging to the Secret Service and several other entities," McKenzie says. "While precise alignments and numbers cannot be divulged, most motorcades include, at a minimum, a vehicle for the protectee, vehicles for security personnel, and vehicles for local or state law enforcement support."

At the virtual center of a presidential motorcade is the presidential limo, which carries the president, a few Secret Service agents, and other high-ranking dignitaries or family members. In December 1941, shortly after the Japanese bombed Pearl Harbor and the U.S. entered World War II, Franklin D. Roosevelt became the first to use an armor-plated vehicle.

Today's well-armored presidential limo is surrounded by other vehicles in the motorcade, including other decoy limos and many support cars. In a 2016 article, The Drive suggested there may be as many as 20 different limos in the presidential fleet, though we couldn't get McKenzie to confirm this info. When a president visits, the presidential limo and many other cars in the motorcade (however many the Secret Service deems necessary) — including, perhaps, a spare limo — are shipped to the destination via Air Force planes.

The limo carrying the president is preceded in the motorcade by different vehicles closing streets and clearing the way — often, local police on motorcycles do that job — and is closely accompanied by at least one other limo. The two limos move back and forth, swapping places, during the procession, according to The Drive.

While the motorcade is in motion, highly trained Secret Service drivers execute a classic roving 'shell game,' weaving Stagecoach and Spare, or Spares, in and out among each other so that a would-be attacker would have a tough time picking the car actually containing the President. The presidential limousines even have identical plates.

The current presidential limo is known as "The Beast," a Cadillac hybrid that, if it's like previous presidential limos, sports "bullet-proof glass, a supply of the president's blood type and an independent air supply to thwart a chemical attack," according to TechCrunch.

Secret Service details, communications vehicles and other support vehicles (including a lot of heavy-duty SUVs) follow the presidential limo, according to The Drive. The rear of the convoy includes vehicles carrying members of the press, an ambulance and more local police to protect the rear of the motorcade. The Secret Service always is in charge.

Things don't always go smoothly. A few motorcycle officers assigned to the presidential motorcade in Lake Charles, Louisiana, in May 2019 were injured in an accident. Still, that motorcade got its job done, delivering President Donald Trump safely to his destination, even if there were a few traffic tie-ups along the way.

NOW THAT'S INTERESTING
FDR's first armor-plated limo was seized by the Treasury Department from gangster Al Capone in 1932. That car had bulletproof glass, but the body was vulnerable to bullets. The Secret Service started armor-plating limos in 1942.

How to Treat Poison Sumac 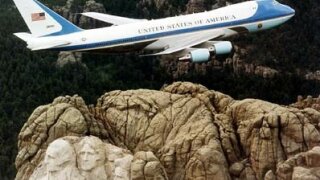 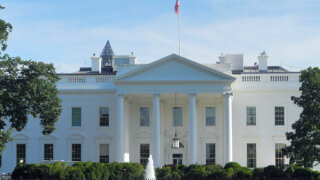 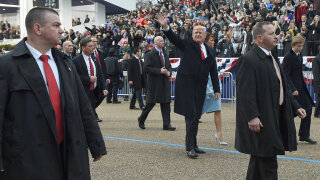 How the U.S. Secret Service Works 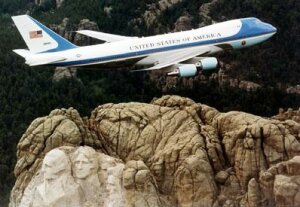