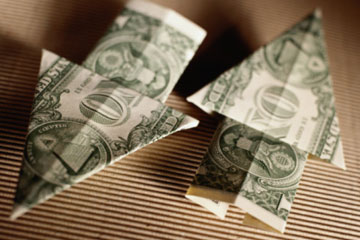 You don’t need fancy paper to make origami. Even a simple dollar bill will do.
Ryan McVay/Digital Vision/Thinkstock

Any kind of paper that holds a crease will work for origami. But the most common kind of paper is called kami, or koi paper, and it's specially designed to suit the needs of paperfolders. Kami is thin, crisp, easy to fold, holds a shape, and it doesn't lose a lot of its strength after it's been manipulated.

Washi is a thick, tough paper prized for its sturdiness and organic feel. But washi is also a handmade and, thus, very costly kind of paper. Another downside to washi is that its thickness prevents artists from making precise creases and folds.

You don't need to spend money on expensive papers for origami projects. Really, just about any paper will do. Artists make models with cheap copy paper, paper currency, and even toilet paper.

The artistry of origami isn't just for tinkering. It's proven useful for researchers, who must find the best way to fold certain types of products, such as solar arrays and air bags. And therapists find that emotionally troubled patients sometimes respond better to treatment when confronted with the mental tasks demanded by origami.

Teachers add origami to their lessons to help students learn geometry and other mathematical acrobatics. The visual and tactile elements of origami seem to help some students better absorb math instruction.

But a lot of people fold paper simply because it's fun. There is both mystery and order in origami. Logical thinking plays off of intuition as artists work, constructing models that provide intrigue and inspiration to anyone who sees these works.

But Your Fingers Will be Very Tired

A Japanese legend holds that if you fold 1,000 paper cranes, your wish will come true. Paper cranes are often given as good luck gifts, too, after wedding or birth, or as a get-well gift for someone suffering from sickness or injury.