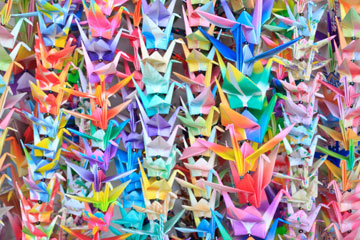 Akira Yoshizawa was a master paperfolder. He was also prolific, as he folded around 50,000 models during his lifetime
iStockphoto/Thinkstock

European countries certainly played a role in the popularization of origami, but it was the Japanese who took origami from its humble beginnings to its greatest artistic heights.

Through the 1800s, Japanese authors published more and more books about origami, further embedding the art in Japanese culture. During the same era, schoolteachers in both Japan and Europe were teaching the art of paper folding to their students, but the designs resulted mostly in the same traditional models that had been passed along for generations. That would soon change.

Perhaps no other single person had a greater impact on origami than Akira Yoshizawa. Yoshizawa spent most of his early life toiling in obscurity, working labor-intensive jobs and expanding his paper folding repertoire as a hobby. During the 1930s, he developed a system of diagrams, symbols and arrows that offered detailed insights on creating complex models.

In the 1950s, he published books filled with those detailed diagrams, including instructions for entirely new and imaginative kinds of models. He also invented the concept of wet folding, in which parts of the paper are dampened and then manipulated to provide a more rounded and sculpted appearance, allowing for a greater range of potential subjects.

Subsequent media exposure helped make Yoshizawa an internationally recognized artist. He participated in art exhibitions all over the world and is still revered as the master folder who helped launch origami as an art movement.

These days, talented and skilled paper folders are found across the globe. Their technical expertise lets them create incredibly detailed shapes and forms, including models of animals, plants and other features of the natural world that look almost lifelike.

None of these intricate designs would be possible without a few origami innovations. On the next page, you'll see how minor tweaks in technique and tools let artists construct cutting-edge creations.

And He Didn't Test Positive for Steroids

In August 2010, Marten Brouwer of the Netherlands set a world record by folding 100 paper cranes in only 54 minutes and 30 seconds.