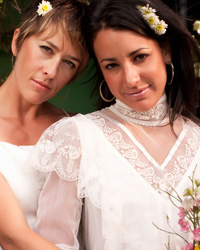 The right of same-sex couples to marry is hotly contested.
Doug Berry/Photodisc/Getty Images

The rise of second-wave feminism in the 1960s and 1970s brought an end to the cult of domesticity; more women began to work outside the home and the idea that married women were expected to be subservient to their husbands was considered preposterous. For the first time, women didn't feel that they had to get married, and since then, people have been marrying later, if at all. In the United States, the government began to loosen some restrictions about who could get married; the 1967 Supreme Court Case of Loving v. Virginia, for example, eliminated laws prohibiting interracial marriage. However, some restrictions remain: same-sex marriage. Today, many countries are grappling over whether to allow same-sex couples to marry. In some states and countries, civil unions between gay couples are permissible, while some states and countries are allowing these couples to legally marry.