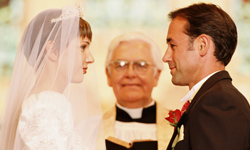 Today, priests officiate at many weddings, even some in which the bride and groom aren't religious, but a minister wasn't an essential feature until the 13th century.
Taxi/Getty Images

The union between a man and a woman is described in the sacred texts of most religions. For many centuries, though, the Christian church took a decidedly hands-off approach to marriage. During the 12th and the 13th centuries, however, the church became more involved in performing ceremonies and dictating who could get married. Churches prohibited marriage between in-laws, blood relations and families who were linked by the bond of godparent and godchild. The church would often undertake investigations to assure that these conditions were met. It wasn't until the 12th century that a priest would participate in a marriage ceremony, and it would take another hundred years before the ceremony was actually performed by a priest.