Why don't we live underground? 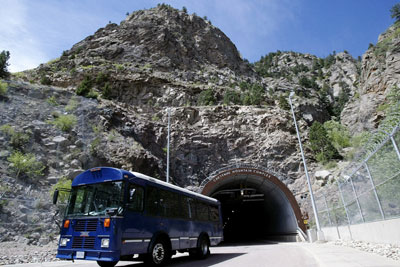 The one and only way in or out of NORAD's Cheyenne Mountain control center.
Robert Nickelsberg/Getty Images

Washington serves as a catchall term for the seat of power in the United States. It's taken on a single collective identity, as in "Washington's decision to send a senior diplomat to nuclear talks with Iran" [source: Reuters]. Canada has a catchall town too -- Ottawa -- and during the Cold War, Washington and Ottawa worked closely to defend their shared continent from Soviet attack.

The most prominent result of this joint defense venture was NORAD, the North American Aerospace Defense Command. Cultivated from a three-tier radar detection system spanning Canada from its southern border to the Arctic Circle, NORAD was an integration of both nations' detection systems into one comprehensive network. It was helmed through two controls centers: one in Canada and one in the United States. Washington placed its high value target inside one of the most secure locations on earth -- deep within Cheyenne Mountain in Colorado.

After carving out 700,000 tons of the mountain's granite innards and securing the only egress into the command center with two 3.5-feet thick steel blast doors, ­the U.S. military was confident the base could withstand a direct nuclear strike [source: The Gazette, DTIC].

The confidence in the security afforded by subterranean structures isn't exclusive to the United States. Chairman Mao constructed an underground city beneath Beijing following a border dispute with the Soviets in 1969. In the current unpolarized world, the seats of power are splintered, with the most powerful wielding information rather than intercontinental ballistic missiles. But the mentality that subterranean equals security has remained a constant.

There are companies that operate the networks the citizens of the world use to circumvent the Internet. And there are others that maintain those same people's credit histories and other sensitive information. Both of these powerful industries have determined that subterranean locations are the best sites to store their golden geese. Underground structures are less susceptible to physical intrusion and natural disaster. They also offer constant temperatures, and since subterranean buildings aren't susceptible to the fickle nature of aboveground weather, they require less energy.

One wonders with the benefits offered underground why we don't live there. 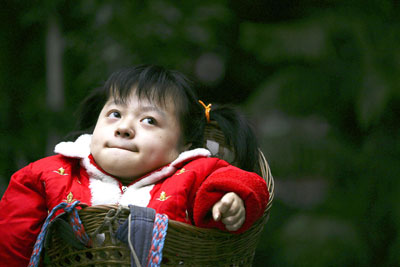 Nineteen-year-old Shao Ling struggles with rickets, which has kept her height at about two feet (06.m). She suffers from congenital rickets, but the developmental disease can also be the result of a vitamin D deficiency.
China Photos/Getty Images

We construct our houses aboveground and our skyscrapers into the air for a reason. Mostly it's because we were designed (or evolved) to thrive in the topside environment. We gain physical and mental health from the sun, air and flora and fauna we share the aboveground world with. Should a massive shift to subterranean dwelling take place among humanity, we would essentially be challenging evolution to do its worst. And evolution's worst generally results in costly damages to a species -- like extinction, say.

Humans are diurnal creatures, meant to be active when the sun's up and asleep at night when it goes down. We actually have a circadian rhythm, a biological clock that dictates our slumber patterns based on the cycle of the sunrise and sunset. We're inextricably dependent on the sun.

That link becomes clear through vitamin D. This essential ingredient for human physiological function prevents rickets (improper and weak development of bones) in children and bone loss in the aged. It's also been linked to metabolic and immune system function and reduction in hypertension. So we need vitamin D , and the curious part is that it's the only vitamin humans require that we don't derive from other sources like food or Vitaminwater. We actually produce vitamin D within our cells through photosynthesis, a process that's impossible without ultraviolet radiation (UVR) accepted from the sun through our skin.

We also produce serotonin through sunlight. This hormone is largely responsible for our positive moods, and people who don't produce enough due to a lack of exposure to sunlight can become depressed, a condition referred to as seasonal affective disorder (SAD).

Air is another important ingredient for proper functioning of the human body. Above ground, it's found in aces. The human lung has developed to accept the mixture of elements (mostly nitrogen, some oxygen and traces of argon and carbon dioxide) at the atmospheric pressure found around sea level. Dwelling too long tens or hundreds of feet below sea level, like via scuba, can result in the components of air separating from the blood, becoming bubbles. This creates the life-threatening situation called the bends. The same pressure from the force of gravity is found in the Earth's crust just as it is in the oceans. Miners must utilize the same type of decompression staging as they return to the surface, and, upon rescue, trapped miners are hurried off to a decompression chamber to readjust to sea level atmospheric pressure in the same way rescued divers are.

Of course, there's something to be said for adaptation. Without it, evolution wouldn't exist at all, and a move underground would simply accelerate the process. On the other end of the atmospheric pressure spectrum, generations of humans who've lived at high altitudes, like Tibetans and Andeans, have acclimated to the thinner air. They've adapted to derive more of the scarce oxygen from the air into the bloodstream than sea-level denizens. Underground, our fellow mammal, the mole, evolved to produce and circulate a larger amount of blood and oxygen-rich hemoglobin than similarly sized aboveground counterparts.

Humans could arguably thrive below ground using our most favored adaptation tool: technology. Why wait for eons of evolution to take place and risk the whole survival of the fittest aspect when we can simply whip an environment into the one we desire?

That's precisely what some people who've made the move underground have been forced to do. Rather than adaptation, however, it's generally viewed as addressing design challenges.

Earth-sheltered Homes: How Deep is Your Love? 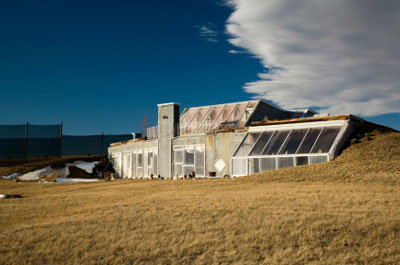 This modern subterranean dwelling is a fresh take on an ancient idea.
indykb/iStockPhoto

The fantasy-drenched concept of a race of humans living below ground is actually an old one. Indigenous tribes have long recognized the climatological and security benefits afforded by living underground. Modern versions of these dwellings are already underway in some quarters. Homes are being constructed below ground, as are other facilities, like the underground Marin County Jail, designed by legendary architect Frank Lloyd Wright. In creating these subterranean dwellings, measures are being taken to ensure a future sketch of humanity doesn't depict sheet-white, blind creatures that suffer from rickets and crippling depression and subsist on a diet of worms plucked from dirt walls. Even when living below ground, we must find ways to harness the essentials that we need to survive.

Water's not a problem; 30 percent of the freshwater on Earth can be found underground at any given time in the form of aquifers. This source is constantly replenished by precipitation trickling through the soil, which acts as a purifier [source: USGS]. Air doesn't operate the same way as water below ground. The density of soil makes it difficult to breathe, and less air is found below ground, which explains why you suffocate shortly after being buried alive.

This little problem and the need for sunlight are addressed through the atrium or courtyard design of earth-sheltered homes. These homes are built below ground on all sides, save for an entrance that usually looks like a door planted in the side of the hill. The only exposed area of the structure is a central atrium or courtyard, which allows air and sunlight into the home. In subterranean homes without any exposed areas, ventilation systems and shaft skylights serve the same purposes as an atrium.

Sunlight will stream into a much more massive underground structure in Japan through a pair of covered domes, the only feature that will divulge the subterranean city beneath. Due to their immense population sharing a proportionately small land mass, the Japanese are unsurprisingly at the cutting edge of underground construction. Their biggest project is the double-domed Alice City, based around two central shafts plunged 500 feet (152 m) below ground. The shafts allow light to enter and serves as the nucleus for an ant farm of office space, entire shopping malls and residences. Necessities like ventilation, power generation and waste are all handled on-site below ground [source: Time].

Alice City is not yet constructed, though slightly less ambitious projects are operating around Japan. Through ventures like underground offices and shopping malls, the Japanese are hammering out the problems with subterranean living. A television studio 66 feet (about 20 m) beneath Tokyo's street level addressed the problem of a sense of isolation among workers by simulating the weather aboveground. A fire in the subterranean mall that took the lives of 15 people in 1980 taught designers to keep the air thinner to reduce smoke and invest more heavily in fire sensors and sprinkler systems in underground structures than they do in aboveground ones [source: Time].

The Japanese are also hammering out the intricacies of growing food below ground through the Pasona O2 project. The Pasona staffing agency created a working underground farm in an unused bank vault located beneath the company's offices, five stories below ground. Using hydroponics and artificial lighting systems, the company is successfully growing crops like tomatoes, strawberries and rice [source: Trends in Japan].

Population trends suggest the globe will experience as many as nine billion people packed across its surface by 2050 [source: U.S. Census Bureau]. With space aboveground at a premium, subterranean living could become more than just viable, it may become a necessity.