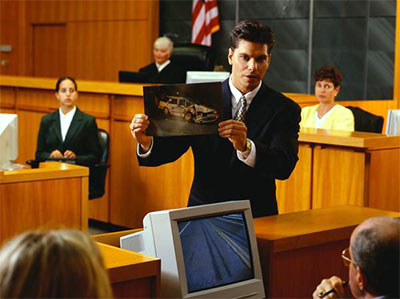 A lawyer presents evidence to a jury.
Photo courtesy of © Guy Cali/Corbis

Although federal courts are the most powerful courts in the United States and play an essential role in shaping judicial policy and practice, state courts do much of the “grunt” work that keeps our judicial system running. They’re also the courts that Americans are most likely to have contact with in their lives.

Special jurisdiction courts, which also can be called county, district, justice, justice of the peace, magistrate or police courts, hear the following types of cases:

State courts have a variety of systems for how judges attain their positions -- some are appointed by governors, others are elected and have to periodically face reelection. For more information about your state court, check out the National Center for State Courts’ listing of state court Web sites.

Jury duty: it’s been a bad Pauly Shore movie and a source of confusion for millions of Americans. But jury duty is also an essential part of our judicial system. If citizens didn’t give up some of their time to serve on juries, conducting fair trials would be almost impossible. Let’s look for a moment at how juries work.

As we learned earlier in the article, the U.S. Supreme Court and the Court of Appeals do not use juries. But Federal District Courts, the trial courts of the federal judiciary, do. State trial courts also depend on jurors, who are randomly selected from a pool of registered voters and people with driver’s licenses to ensure a cross-section of the population. Being selected in this way is known as being summoned. A summoned juror must complete a questionnaire to determine if there is any reason that he or she can be disqualified from serving.

A jury summons contains instructions that tell the summoned person how to report for jury duty.
Image courtesy of Commonwealth of Massachussetts

Being summoned for jury duty does not mean you willA summoned juror won’t automatically have to serve on a jury. However, you he or she will likely have to go to the courthouse and undergo a process called voir dire, where judges and lawyers question potential jurors to determine if they’re fit to serve. People with past experience with the alleged crime, knowledge of either party or who have obvious prejudices may be prevented from serving. Lawyers can also exclude some jurors without giving a reason.

There are two types of juries on which private citizens may be called to serve. A trial jury, also known as a petit jury, is made up of six to 12 people for a civil trial and 12 people for a criminal trial. A grand jury, as discussed earlier in the article, is a panel of 16 to 23 people who determine whether there’s “probable cause” to charge someone with a crime.

For more information on juries, courts and the judicial system, please check out the links below.