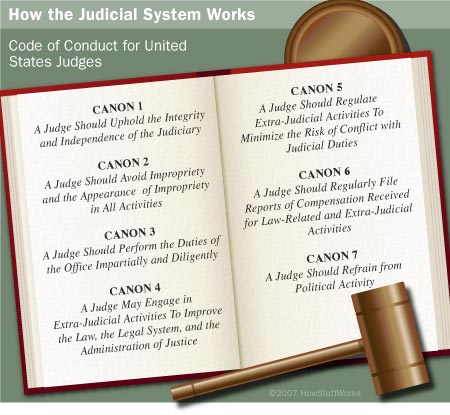 Federal judges are required to abide by a strict code of ethics.

The Constitution grants Congress power to create and abolish federal courts, although the United States Supreme Court is the only court that cannot be abolished. Congress also has the authority to determine the number of judges in the federal judiciary system.

In general, federal courts have jurisdiction over civil actions and criminal cases dealing with federal law. Jurisdiction can overlap, and certain cases which that may be heard in federal court can instead be heard in state court. Federal courts can only interpret the law in the context of deciding a dispute. A court cannot approach an issue on its own or in a hypothetical context.

Federal judges, with a few exceptions, are appointed for life -- until they die, retire or resign. The Constitution calls for federal judges to act with “good behavior,” and they can be impeached for improper or criminal conduct. A strict code of conduct exists for federal judges, guiding their behavior. Many judges are also considered scholars in their field and spend time speaking, working in the community, teaching or writing in legal journals. Judges who retire, known as senior judges, may be called up on a full- or part-time basis to help with cases. Senior judges handle 15 percent to 20 percent of the workload for appellate and district courts.

Each federal court has a chief judge who handles some administrative responsibilities in addition to his or her regular duties. The chief judge is usually the judge who has served on that court the longest. Chief justices for district and appeals courts must be under age 65 and may serve as chief judge for seven years but not beyond age 70.

Each court also has its own staff of employees, including court reporters, clerks and assistants, who are vital to the operation of the court. A court’s primary administrative officer is the Clerk of the Court, who maintains records, is responsible for the court’s finances, provides support services, sends official notices and summons, administers the jury system and manages interpreters and court reporters.

A clearly structured hierarchy allows the federal court system to maintain distinct spheres of jurisdiction for each court.

Federal courts can decide cases involving disputes under federal law, the U.S. government, conflicts between states or between the U.S. and foreign governments. The case has to raise a “federal question” in order to be heard in federal court.

Personal jurisdiction is the question of whether a court has authority over an individual or business entity. For example, a court in Vermont cannot make a California resident come to Vermont to defend a lawsuit if he’s never had contact with that state -- either by going to that state, having contact with someone in that state, selling something to a Vermont resident, etc. Similarly, foreigners can’t be made to come to U.S. courts unless the foreigner has had contacts with people in the U.S. relating to the case.

Generally, corporations are treated like individuals in federal and state courts. They can sue and be sued. For the purposes of diversity jurisdiction, there are also rules that determine of which state a corporation is a “citizen.”

Now that we’ve gone over some of the basics of federal courts and judges, let’s look at the different types of courts, starting with the most important of them all, the Supreme Court of the United States.