Is it rude to use a speakerphone in the cube farm? 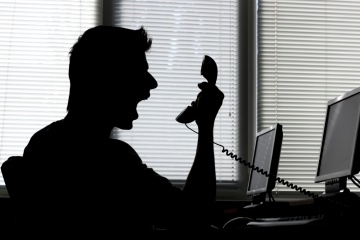 We've all had that coworker who refused to keep their sound to a minimum, but this time it's you. After all, if it's an important conference call, it's OK to use your speakerphone just this one time, right?
Georgii Dolgykh/Thinkstock

It's intimidating to imagine that we might unwittingly have been on speakerphone when conducting a phone call with, say, a Chatty Cathy customer service representative at our health insurance company. It's unpleasant enough to have to detail with one stranger where your rash is and why you'd like the ointment covered by your policy; it's another to imagine that your rash discussion is being broadcast to Cathy's colleagues Danny, Rajiv, Dodi and Tina in real time as they attempt to work on their quarterly reports. Frankly, paying for the ointment out-of-pocket might be worth it.

I think most of us agree that there are limits to what we can and should do in an office where cubicles dominate. For instance, don't bust out the nail polish remover for a quick manicure and expose your coworkers to noxious fumes. Don't turn on sports talk radio and expect everyone to enjoy the lively discussion of NFL draft prospects. And for the love of the Cube Farm Idol (it's a strongly worded post-it note), do not -- under any circumstance -- use speakerphone at your desk.

There is no reason that you need to use speakerphone at your desk, unless you're literally negotiating a "Speed"-type hostage situation and absolutely everyone in the office has to be apprised of the captor's demands. In fact, yes. In that case, you should absolutely put the call on speaker. In fact, let's be generous and say one other reason to use speakerphone in your cubicle is if Dennis Hopper calls, period. Note: He died in 2010.

Okay, enough absurdity. The truth is, you're not going to find any authority -- or even self-appointed know-it-all -- that will tell you it's considerate to coworkers to put conversations on blast. And let's recall our scenario in the first paragraph: When it comes to speakerphones, it's not just about those around us, it's also about the person you're having the conversation with. Unless you've checked with everyone within earshot and the person you're speaking to, confirming thumbs up for all, you can't assume that the conversation can be public.

Sure, there aren't always written rules and policies for cubicle -- or even business -- behavior. But let's refer to Miss Manners' advice when asked about office etiquette: "Rules are not enough. Toleration and cooperation also required" [source: Miss Manners]. Let's all just remember that a little consideration goes a long way, especially in a tight space.