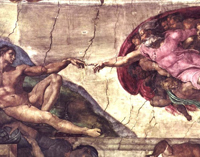 The intelligent design movement has created quite a stir in the United States. ID proponents claim that their theory is scientifically sound and is not based on any religious beliefs, and it should be taught alongside evolution in public-school science classes. The scientific community claims that intelligent design is not scientific at all and is in fact a metaphysical theory that should be taught in philosophy class, not science class.

People who object to the inclusion of intelligent design in science instruction are concerned not only about what the scientific community considers to be bad science, but also about what the leaders of the ID movement have said to their followers. A mission statement of the Discovery Institute's Center for Science and Culture (then the Center for the Renewal of Science and Culture) states:

Discovery Institute's Center for the Renewal of Science and Culture seeks nothing less than the overthrow of materialism and its cultural legacies. Bringing together leading scholars from the natural sciences and those from the humanities and social sciences, the Center explores how new developments in biology, physics and cognitive science raise serious doubts about scientific materialism and have re-opened the case for a broadly theistic understanding of nature [ref].

At the same time, statements from ID movement leaders call greatly on religion. Phillip E. Johnson of the Discovery Institute, speaking of the purpose of the ID movement, has said:

The objective ... is to convince people that Darwinism is inherently atheistic, thus shifting the debate from creationism vs. evolution to the existence of God vs. the non-existence of God [ref].

In the July/August, 1999, issue of Touchstone Magazine, William Dembski says, "... intelligent design is just the Logos theology of John's Gospel restated in the idiom of information theory." And later, in 2005, he makes the following remarks:

... intelligent design should be understood as the evidence that God has placed in nature to show that the physical world is the product of intelligence and not simply the result of mindless material forces. This evidence is available to all apart from the special revelation of God in salvation history as recounted in Scripture.

... To be sure, creationists who support intelligent design think it does not go far enough in elucidating the Christian understanding of creation. And they are right!


... Even so, there is an immediate payoff to intelligent design: it destroys the atheistic legacy of Darwinian evolution. Intelligent design makes it impossible to be an intellectually fulfilled atheist. This gives intelligent design incredible traction as a tool for apologetics, opening up the God-question to individuals who think that science has buried God [ref].

There are also widespread claims that the majority of the Discovery Institute's funding comes from Christian fundamentalist organizations and individuals, noting especially the millions of dollars donated by philanthropist Howard Ahmanson, an evangelical Christian, and hundreds of thousands of dollars provided by the Maclellan Foundation, which seeks to "serve strategic international and national organizations committed to furthering the Kingdom of Christ ... by providing financial and leadership resources to extend the Kingdom of God to every tribe, nation, people, and tongue" [ref]. The Discovery Institute responds by saying that the avenues of its research are determined by its board of directors, not its financial supporters.

All of this, along with questions as to the scientific validity of intelligent design arguments, has led many to believe that the intelligent design movement is a calculated approach to get a creationist view of the origins of life into public-school science classes -- that it is in fact religion disguised as science. Proponents of ID insist that this is not the case -- that intelligent design is separate from creationism and is based entirely on scientific evidence.