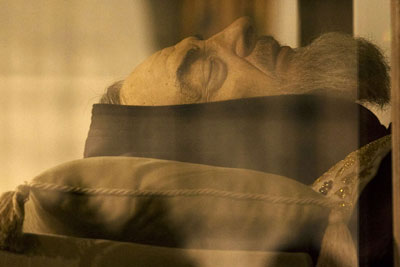 Saint Padre Pio, who died in 1968, was exhumed in 2008 and found to be intact enough to be canonized. Although he was outfitted with a silicone mask (shown), physicians at his exhumation testified his face was not badly decomposed.
Marco Secchi/Scoopt/Getty Images

It's a fact: Carbon-based life forms here on Earth are eventually going to cease to exist. And that includes you and me. Regardless of where you reckon your soul will travel (or even if you believe you have a soul), one thing's guaranteed. That vessel we call a body is going to undergo some unpleasant changes after you die.

Without life-sustaining processes like blood circulation and metabolism, the body begins to degrade. Skin falls away, eyeballs disintegrate, hair turns to dust, and eventually, so, too, will your bones. All of this is good news for the worms and bacteria that live in soil and feast on decaying material like your dead body. And it may be comforting to know that you'll be recycled -- or at least composted -- after death.

But according to the tenets of the some faiths, there is a way to thwart the process of decomposition. For centuries, the Roman Catholic Church held that individuals of the purest faith remain in a lifelike state after death, their bodies resisting the decay of the grave.

There are a number of documented cases in which people have been exhumed years after their deaths and were found inexplicably preserved. Even more amazing, some of these people have remained preserved for centuries. The church viewed this as a measure of sanctity, and incorruptibles -- people whose bodies mysteriously thwart decay -- were canonized into the tenets of Catholic mysticism. Incorruptibility became a component of beatification -- the process of becoming sainted. This process also included the prospective saint appearing in visions to people after death and performing miracles, either after or during life.

If all of this sounds a bit like hooey, take note: There are churches all over the world today in which you can see incorruptibles on display. Some have begun to decay, and others are still fighting the process of decomposition, even hundreds of years after their deaths.

So how can a corpse be incorruptible? Find out on the next page.