The Modern History of the Hula Hoop 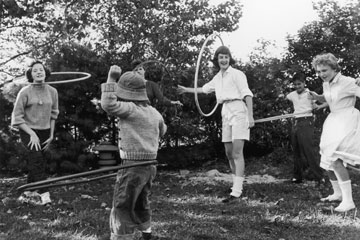 The word "hula" entered the English language in the 1700s, when British explorers brought back tales of Polynesian hula dance. These ritual dances didn't actually entail the use of hoops, but the oscillations of ankle, knee and hip were very much like the motions required to sling a hoop around the waist. As such, the term stuck.

The late 1800s and early 1900s saw the introduction of hoop dancing into the world of physical fitness as Switzerland's Émile Jaques-Dalcroze incorporated the hoop into a special training system for musicians and dancers, which he called "eurhythmics" [source: McInturf]. French artist Jean-Léon Gérôme even incorporated hoop dancing into his paintings and sculptures to provide a "modern" flare for the late 19th-century audience.

But of course, the hula hoop as we know it today exploded on the scene in 1958. That was the year Wham-O toy company founders Richard Knerr and Arthur "Spud" Melin unleashed their product on an unsuspecting American public. Inspired by tales of Australian children and bamboo hoops, the two men decided to bring the concept into the plastics age. Colorful Wham-O Hula Hoops invaded stores across the country with $1.98 price tags [source: Stevenson].

Wham-O sold an estimated 25 million Hula Hoops in two months and nearly 100 million international orders quickly followed [source: MIT]. By their very nature, however, sales booms and summer crazes don't last forever. By the end of 1958, sales exceeded $45 million, but the hula craze had already run its course. The warehouses soon flooded with unsold hoops, and Wham-O moved on to its next big reboot of a timeless game: the Frisbee.

But the hula hoop didn't just spin off into the sunset. It had been popular for millennia before 1958, and it continued to roll down sidewalks and rotate around hips in the decades to follow.