The Ancient History of the Hula Hoop 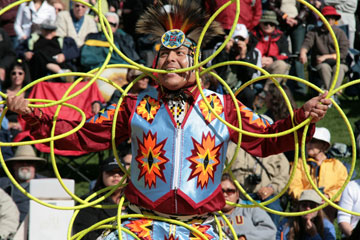 When did humans first experience the joys of hula hooping? Although the actual term "hula hoop" didn't emerge until the 20th century, the toy itself is older than most world religions.

If you were to travel back in time to 1,000 B.C., you'd find Egyptian children playing with hoop toys of dried grapevine. No doubt they threw them, jumped them and slung them around their bodies like we do today. But for the most part, the ancient hooping pastime of choice involved striking the hoops with sticks to roll them down the road.

Hoop rolling remained a popular game in the cultures of ancient Greece and Rome. The Greeks decorated their large, metal hoop toys with bells -- and they didn't consider it a mere kid's game either. Even mythological characters got in on the fun. Fifth century B.C. paintings often depict the hero Ganymede with a hoop in one hand and a rooster (don't ask) in the other. Similar hoop games and dances were popular in early cultures throughout Asia, Africa and the Americas.

The ancient British enjoyed a battle game called "kill the hoop," in which participants hurled spears at a rolling wooden or metal hoop. By the 14th century, however, they were just as thrilled to spin the hoops around their waists. Which pastime was more dangerous? If historical records are any indication, the medieval British hoop craze resulted in dislocated backs and heart failure. Physicians of the day even issued a dire warning: "Hoops kill" [source: Panati].

Hoops also spun their way through the cultures of the precolonial Americas as well. As a representation of the circle of life, hoops featured prominently in the ritual dances of the Taos Pueblo people living in what is now New Mexico [source: Heard Museum]. Part performance art and part ceremony, members of native communities continue to engage in hoop dancing both for public enjoyment and for private healing ceremonies.

Native Americans also engaged in their own form of "kill the hoop." The Cahokian people thrived throughout the Mississippi River Valley from roughly A.D. 800 through A.D. 1500, building mounds and -- yes -- slinging hoops [source Pauketat]. According to anthropologist and archaeologist Timothy R. Pauketat, the Cahokians may have used the hoop and stick game of "chunkey" to win the hearts and minds of other Native American tribes, thus spreading both a fun game and a powerful summation of their religious views. Throwing a stick through a rolling hoop, Pauketat argues, was at once a symbol of human reproduction and cosmological origins.

The motif recurs throughout Native American folklore: Human life begins with the masculine penetration of the feminine, and the universe itself kicks off with light's penetration of the darkness. The rolling hoop may have also symbolized the sun moving across the horizon and the careful balance between light and darkness, masculinity and femininity.

But then again, sometimes a hoop is just a hoop. Let's fast-forward to the 1500s.