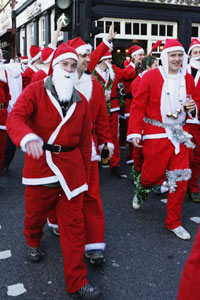 When Jeff Moriarty first learned about flash mobs, there was little chance that he wasn't going to participate in one. A veteran of improv comedy, the same impulse that made him enjoy the unscripted surprises and laughter that come out of those performances drew him to flash mobs. "I like making people laugh. I like doing the unexpected and surprising people and shaking up their world a bit," says Moriarty, who lives in Phoenix and is a founder of Improv AZ, an improv comedy group.

Moriarty's first flash mob was in January 2009, when he was one of around 100 participants in a so-called "no pants" flash mob, which took place on the city's newly opened light rail system. The bemused, surprised, delighted and disgusted looks on people's faces when Moriarty and others dropped their pants (they still had shirts, underwear and other clothing on) made it all worthwhile. "That's why I love it, those reactions," he says.

Besides the shock value, there are clearly other reasons so many people are eager to join flash mobs. Some are drawn by the in-person interaction it enables, a welcome counterpoint to all the online and virtual relationships prevalent today. Still others appreciate the spontaneous and creative nature of flash mobs. In that regard, there really is no limit to what can be done. For his part, Moriarty has participated in flash mobs where a group gets together for a fake protest, the only direction being to act passionately and come up with a three-word chant that nobody could interpret as being an actual cause: "I hate bananas" was one.

Another flash mob Moriarty helped organize involved around 100 people dressing up like Waldo from "Where's Waldo?" and showing up at a mall food court. If the definition of flash mob is loose enough to allow friends to participate and practice beforehand, then the result can be a choreographed dance routine; several flash mobs have mimicked the intricate moves of Michael Jackson's "Thriller" video.

Read on to learn some tips on organizing a flash mob.