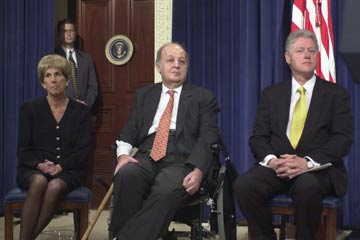 James Brady (C) who was permanently paralyzed during John Hinckley Jr.'s attempt to assassinate Ronald Reagan, sits with wife Sarah and then-President Bill Clinton on the seventh anniversary of the Brady bill in 2000.
© Ron Sachs/CNP/Sygma/Corbis

In 1981, John Hinckley Jr. tried to assassinate Ronald Reagan to win the attention of actress Jodie Foster [source: History]. He ended up shooting several people, including the president, a Secret Service agent, and then-press secretary James Brady, who was critically injured in the attack and would be in a wheelchair from that point on.

The year before, Hinckley had been arrested for stalking President Jimmy Carter [source: National Law Enforcement Partnership]. The Brady Handgun Violence Prevention Act, or "Brady bill," called for background checks – which presumably would have turned up Hinckley's past arrest – before all handgun purchases. After years of campaigning by proponents, the law was passed by Congress in 1993, and it went into effect in 1994.

The Brady bill established three major changes in gun regulation, and the first two were immediately implemented. Beginning in 1994, federal law called for mandatory background checks and a five-day waiting period for all gun purchases from federally licensed gun dealers (or FFLs – Federal Firearms Licensees). This was before most criminal records were easily accessible in centralized computer databases, and the waiting period was designed to give the FBI enough time to search [source: National Law Enforcement Partnership].

The third key point in the Brady bill called for the development of the National Instant Criminal Background Check System that we just mentioned. The NICS, a department of the FBI, would be the central processing point for all of those pre-purchase background checks, with the ability to tap into multiple sources electronically. When NICS went online in 1998, checking backgrounds became a quicker process, and the federal five-day waiting period was dropped [source: National Law Enforcement Partnership].

Since then, the time it takes to conduct a basic firearms background check has decreased. NICS can search both state and federal criminal records and return a response in about 30 seconds. The whole process starts with the potential buyer filling out a rather succinct ATF Form 4473.