What is groaning cheese? 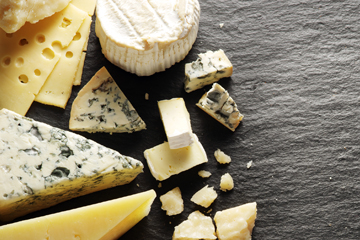 Bringing gifts to a baby shower is pretty mandatory, but most modern moms won't be expecting a huge wheel of brie on their big day.
ValentynVolkov/Thinkstock

One of the more traditional customs when a child is born is the proud partner, handing out celebratory cigars to friends and loved ones. However, back around the 16th century in Great Britain, once a woman went into labor, the father got busy procuring a wheel of cheese instead of cigars.

This cheese, called "groaning cheese" to symbolize the noises a woman emits in pain during childbirth, was a symbol of good luck. Sometimes a cake accompanied it as well, called a "groaning cake." As soon as the baby was born, pieces of the groaning cheese were distributed among everyone in the room, or the house and the baby's first visitors. This was thought to bring great luck to the baby. It was the father's responsibility to slice the cheese — always from the middle of the wheel then outward — and he had to be extremely careful. If the father cut himself while serving the cheese, his child would die within a year. But no pressure!

Why cut the cheese from the middle out to the rind? Once all the cheese was served and eaten by family and friends, the cheese rind would be a hollow ring. During the baby's baptism, the infant would be passed through the ring to ensure good luck for the rest of his or her life.

Groaning cheese didn't bring luck to just the baby, though. Sometimes the first pieces of cheese were placed into the apron of the midwife, which was believed to cause the young women of the house to dream of their future loves. Or, the young women would nibble on their pieces of cheese and then place the uneaten pieces under their pillows, with the same hope of catching a glimpse of their future husbands in a dream. If someone refused a portion of groaning cheese, however, it meant the child would grow up unlucky and devoid of personal charm.

According to superstition historians, the typical type of groaning cheese was Cheshire, and a typical groaning cake was spicy, such as gingerbread or plum [source: Radford and Radford]. Cheshire cheese is a British cheese rumored to have been around since Roman times. The taste is dense, crumbly, and tangy — becoming more so as it ages.

Of course, groaning cheese is just one of many superstitions and rituals around childbirth and pregnancy. Following are some of the more interesting ones from around the world:

If you're looking for something unique and fun to do next time a close friend or family member has a baby, think about recreating the legend of groaning cheese or groaning cake. It makes for a great story, everyone gets to eat, and what's cuter than passing a newborn through a rind of cheese?

The Memorable Mnemonics Quiz
How Many Butts in a Buttload?
How Bobby-soxers Worked