How a State's Attorney Works 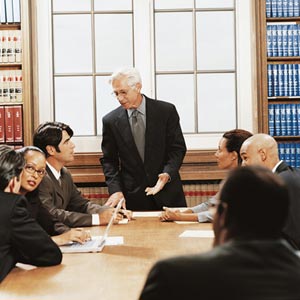 As the head law enforcement official for their jurisdiction, they're also charged with looking out for the public's interest in all legal matters. Sometimes, that means filing a lawsuit against a company taking part in illegal business practices, in order to punish it and force it to stop. Other times, it means being the legal adviser to other elected local government officials. It can also mean taking people who fail to follow civil laws, such as zoning violations or child support issues, to court.

In general, State's Attorneys are elected by the people they represent. Their duties are spelled out in the laws of the local governments they represent, and they're held accountable by the voters for how well they do their jobs and how well their performance matches up with the local politics of the area.

But a State's Attorney hardly ever does the job alone. Many have offices that contain dozens or even hundreds of appointed assistant or deputy State's Attorneys, as well as support staff. These assistants or deputies are the ones who routinely appear in court, representing the State's Attorney's office.

In the next section, we'll find out more about what a State's Attorney does and how he or she participates in the legal process.

What Does a State's Attorney Do?

First, police file a warrant or charging request with the State's Attorney following an investigation. Attorneys review the request and may decide to issue a warrant, which allows the police to arrest the suspect. An arraignment in court follows, at which the suspect is formally charged with a crime and enters a plea. Depending on the type and severity of a crime, there can be several pretrial hearings. At some point during these hearings, a plea bargain may be offered to induce the suspect to enter a guilty plea.

Before a trial takes place, the process of discovery takes place, at which the State's Attorney and the defense attorney share information they intend to introduce as evidence at trial. This can include physical or written depositions of witnesses to find out what they know, written questions called interrogatories which the other side must complete, and review of documents and evidence in the case [source: American Bar Association].

If the defendant is found guilty, the State's Attorney recommends a sentence for the judge to determine and may have to argue the case again in an appeal to a higher court.

The State's Attorney can be the debt collector for local government, especially when it comes to property taxes and bankruptcy issues.The office also offers legal advice and representation for local government human service agencies when it comes to child protection and welfare, child support, and adult services, including civil commitment hearings, welfare assistance and vulnerable adult issues.

Next, we'll learn more about the prosecutors charged with enforcing the law and carrying out the directions of the State's Attorney.

Grand juries hear cases brought by State's Attorneys, and only the evidence and witnesses presented by the State's Attorney are considered. A grand jury's job is basically to hear the case the State's Attorney has put together and decide whether or not it should proceed. Rarely do they decline to issue the indictments requested [source: American Bar Association].

One State's Attorney may be on the ballot at election time, but it takes an entire office to carry out the duties of the chief law enforcement official for the region.

The civil side of the State's Attorney's office often includes civil law, child protection and human services divisions. Specialized units may investigate civil rights, workplace and labor claims, medical litigation, property tax and delinquent child support collections. Both criminal and civil divisions are often headed up by a Deputy or Chief Deputy State's Attorney. Other divisions in State's Attorney offices may focus on areas such as alternative sentencing, juvenile justice and victim's services.

The job of an Assistant State's Attorney is often regarded as an entry-level training position for a lawyer and a stepping stone to more prestigious legal employment in the future. Besides court and legal work, Assistant and Deputy State's Attorneys also work with law enforcement officials and public outreach. In Hennepin County, for example, a community prosecution program brings prosecutors, police, residents, business owners and others in an area dealing with high crime together to maximize cooperation and increase successes in arrests and prosecutions [source: Hennepin County Attorney].

For lots more information on the legal system, see the links on the next page.