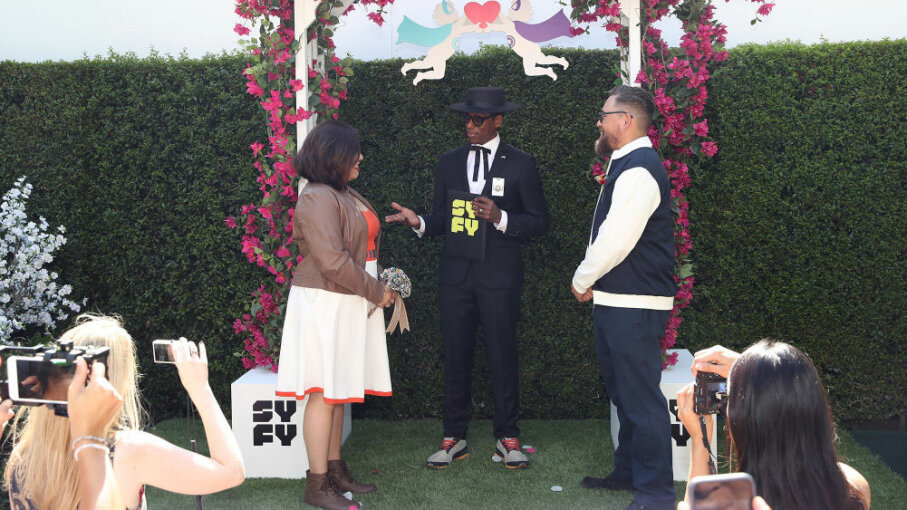 When family law professor Joanna Grossman lived in New York a few years ago, she had to stop attending weddings.

"I hated being the only one sitting in the back thinking, 'this isn't even valid,'" recalls Grossman, now a law professor at Southern Methodist University's Dedman School of Law. "Nobody wants that person at their wedding."

In 2016, 43 percent of couples in the United States had a friend or family member act as the officiant at their wedding, according to a survey by wedding planning website The Knot, up from 29 percent in 2009. And the trend makes sense. Nearly a quarter of American adults say they're religiously unaffiliated and those numbers go up among millennials, who are smack in the middle of marrying age.

In America, state legislatures write the laws about who can perform or "solemnize" marriages, and most give two options: a government official like a judge, city clerk or justice of the peace; or a member of the clergy. For non-religious millennials, that often means a choice between two complete strangers joining them at the altar. That's why the option to recruit a close friend is so attractive. The Universal Life Church is the largest online ordination outfit, stating it has ordained more than 20 million ministers since its founding in 1959. Its ordination process is free but the website offers a well-stocked "minister store" with items like clergy attire, marriage certificates and copies of your ordination license for sale.

My wife served as the co-officiant at the wedding of our good friends Katie and Todd. It took my wife just a few minutes to fill out the online form and download her ordination as a minister with the Universal Life Church (ULC). To be safe, Katie and Todd double-checked at the county courthouse in Idaho that my wife's signature would be accepted on the marriage certificate.

The ceremony, held outside among the majestic Sun Valley mountains, was beautiful and touching and funny and perfectly Katie and Todd. My wife signed the happy couple's marriage license the next morning at breakfast -- following the ULC instructions to enter her title as "minister" and her religion as "non-denominational" -- and it's been marital bliss ever since.

The problem, as Grossman explained in a two-part column, is that marriages performed by internet-ordained friends have not always held up in court. In fact, almost all cases in which ULC marriages have been challenged, the marriages were rendered null and void.

On top of that, attorneys general from two states, Tennessee and Virginia, have issued opinions instructing county clerks not to recognize marriage licenses signed by ULC ministers. (In July 2019, a judge paused a law that was to go into effect in Tennessee prohibiting use of an online minister to solemnize a marriage.)

But before you start to freak out, an important caveat. If you were married by a friend in any state other than Tennessee or Virginia, there's probably no reason to panic. There has never been a case where some random third-party has sued a couple claiming their wedding was a fraud. No one is going to show up at your house to rip up your marriage certificate.

The handful of cases involving ULC annulments mostly concern divorce, where one spouse didn't want to honor a prenuptial agreement or pay spousal support, so they claimed the marriage wasn't valid to begin with because they were married by a ULC "minister."

In those cases, individual judges decided that ULC ministers didn't meet the state's definition of a religious clergy member, because the ULC doesn't claim any religious beliefs and its "ministers" don't lead a congregation.

That said, divorce happens. And there are several other legal situations in addition to divorce that hinge on the validity of the marriage ceremony, says Grossman, including inheritance rights, survivor's rights under insurance, pensions and tax liability.

Most couples, like our friends who got married in Idaho, assume that the city or county clerk's office wouldn't accept a ULC minister's signature if it was against the state law. But Grossman points to the example of the New York City Clerk's office, which recognizes ULC ministers even though New York courts have ruled against ULC marriages on several occasions, finding that ULC ministers don't live up to the state's strict definitions of both a "church" and a "clergyman."

"What I tell people I know is, I don't care what the New York City Clerk's office tells you, because they do not have any special powers to interpret the law. If you'd like to be 100 percent sure that your marriage is validly solemnized, go to City Hall the day before your wedding," says Grossman. "And I've had several friends who have done just that out of an abundance of caution."

Now That's Cool
Massachusetts makes it easy for friends and family to officiate at weddings without having to pose as a minister. For just $20, anyone can apply for a one-day pass as a justice of the peace.