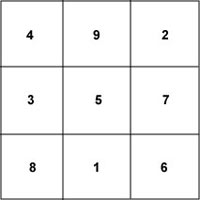 Boxes are the basic building blocks of feng shui -- they help form the feng shui road map, called the bagua.

The three-by-three grid is especially important. Its earliest form shows up in the Chinese "Book of Changes" from the Han Dynasty (206 B.C.-A.D. 220) as the Lo Shu Square (also called the magic square).

The numbers in the Lo Shu Square add up to 15 vertically, horizontally and diagonally. This is the same number of days in a lunar cycle, which is why much of feng shui is rooted in Chinese astrology.

The bagua grid connects the elements to the Lo Shu Square. There are still relations between the numbers and the elements (for example, the number five is considered an earthly, centering number), but depending on the user, there can be a variety of related material associated with a square.

The lines correspond to the binary system of mathematics -- the same system used in computers. The yang is represented by a solid line, and the yin is represented by a broken line. Colors are also associated with the grid, but they also vary according to the practicer. Yellow is consistently in the center square, though.

The symbols representing the squares are called the trigram, and these eight multiply to make the 64 hexagrams that figure prominently in the mathematical calculations of the scientific-formula-based feng shui.

The bagua grid evolves into the bagua map (also known as the "pah kwa"), which is commonly used in everything from feng shui design to the TV show "Lost." Let's take a look at a bagua map, and how each area corresponds to the bagua grid.

Practitioners who use the bagua map will overlay this diagram on a room or house to determine what should be placed in each area, aligning the bottom of the chart (black) with the entrance wall. The following would promote each area:

In the next sections we'll learn about the practical applications of feng shui in your office and home.

Even Mickey Mouse is channeling his chi. Before Hong Kong Disneyland opened in 2005, execs hired a local feng shui master. He advised shifting the angle of the theme park's front gate by 12 degrees to ensure a better flow of energy and maximum profitability. The five elements were carefully incorporated throughout the park -- a projection of a rolling fire was used in one restaurant, for example, and large boulders were placed throughout to "stabilize" the chi. Disney even picked what it was told was a lucky day, Sept. 12, for the opening.