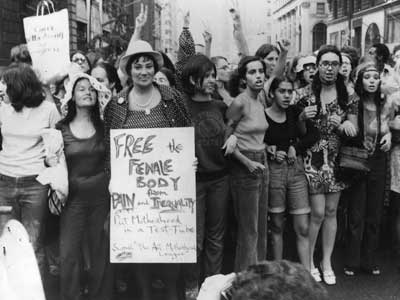 In 1800, women had little control over their lot in life. The average married female gave birth to seven children [source: Dicker]. Higher education was off-limits. Wealthier women could exercise limited authority in the domestic sphere but possessed no property rights or economic autonomy. Lower-class women toiled alongside men, but the same social and legal restrictions applied to this stratum of society as well.

Somewhat ironically, religion fueled some of the initial social advancements women made at the beginning of the 19th century. The Second Great Awakening, which started in 1790, emphasized emotional experience over dogma, allowing women more leadership opportunities outside of the home [source: Dicker]. Abolition and temperance movements that shared Protestant undercurrents activated women as well. Angelina and Sarah Grimke became well-known abolitionists who defied social custom by publicly addressing the American Anti-Slavery Society. In response to the fierce criticism of their speech, Sarah Grimke penned "Letters on the Equality of the Sexes" in 1838. A year before, Oberlin College became the first higher-learning institution in the United States to admit women.

­Around that time, the exclusion of women in many abolitionist organizations prompted Elizabeth Cady Stanton and Lucretia Mott to rally together women -- and some men -- to denounce gender inequalities and demand women's right to vote. In 1848, they organized the Seneca Falls Convention, where they outlined women's grievances and their desire for suffrage. The press responded disdainfully to the convention, but the event laid the groundwork for the suffrage movement. Other prominent leaders, including Susan B. Anthony, Sojourner Truth and Lucy Stone, joined the suffrage ranks as well.

Suffragists began to make headway in 1860 when New York passed the Married Women's Property Act. The bill legalized property ownership, joint child custody and wage retention for women. The use of the word "feminism" to describe the support for women's rights migrated from France to the United States by 1910 [source: Kelly]. But not all suffragists would refer to themselves as such; many advocated solely for voting rights and not complete equality.

British suffragists were called suffragettes. But calling an American suffragist a suffragette would be an insult. Led by the Women's Social and Political Union, British suffragettes had a more radical reputation than Americans. The women demonstrated in public, sometimes destroying property in the process [source: Dicker].