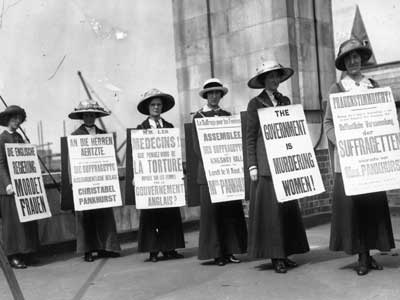 ­The modern feminist movem­ent began as a result of sweeping social, political and industrial changes in Europe and the United States. Many women from disparate backgrounds and social causes contributed to its development, but the movement has ideological roots in France.

In 1610, a French noblewoman started the first salon (a gathering for intellectual discussion or exchange of ideas) outside of the royal court. Although salon participation was reserved for members of the upper class, the cultural institution offered the first secular outlet for educated women to engage in such conversation with men [source: LeGates].

­At that time, women's value and role in society was framed as the querelle des femmes, or "question of women." The querelle addressed education, marriage and social mobility as it related to women, and scholars have referenced it as an example of the earliest feminist thought. Yet it wouldn't be until the Enlightenment and the Age of Reason in the 18th century that social progress began. With those new intellectual currents came the realization that social and cultural institutions are the product of human -- not divine -- efforts [source: LeGates]. This way of thinking meant that changes within those institutions, such as eliminating class and gender limitations, wouldn't be an affront to God.

The Revolutionary War in 1774 and the French Revolution in 1789 also advanced the concept of women's freedom. Both revolutionary themes focused on mankind's equality, although women's equality wasn't highlighted. Nevertheless, by mobilizing more women politically and establishing a consensus of freedom as a human right, those events laid the groundwork for early feminism.

­Amid that turbulence, in 1792, Mary Wollstonecraft published one of the seminal works of modern feminism. The "Vindication of the Rights of Women" argued for the equal education of women, allowing them to become whole, independent people. She reasoned that the current educational systems restricted women's potential to contribute to the betterment of society, as well as the family and home. Her book was one of the first to clearly and forcefully outline a need for change, and early feminists would look to it as an enduring guide.

Defining feminism succinctly is difficult because of its complexity. Here are a few famous explanations of what feminism is: