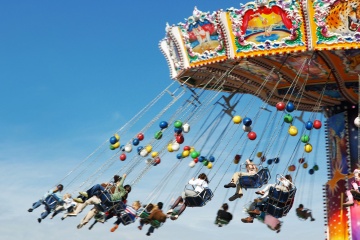 Is it your dream to ride your favorite attraction forever? Your odds aren’t good.
© Ludger Vorfeld/iStock/Thinkstock

Life is wild ride, and like a roaring rollercoaster, full of twists and turns and ups and downs. And life, like an amusement park ride, always eventually comes to a grinding halt.

Sometimes family members don't want the ride to end for their deceased loved one, so they choose to take cremated remains to a favorite amusement park and then scatter them. Those dusty remnants then become a fixture at the park, if mostly in a spiritual sense, leaving departed grampy spending his eternity doing loop-de-loops on his favorite coaster ... for better or for worse.

So the answer is yes, it really is a thing – people scatter ashes of their loved ones at amusement parks. Of course, amusement parks are only one type of location that's popular for these purposes. Families often take cremated remains to their favorite sports parks, rivers, oceans, national parks and a whole lot of other places that they think make for a suitable resting place.

This is a relatively new phenomenon, at least it terms of popularity. Three decades ago, almost everyone preferred to be buried in a casket and fewer than 5 percent chose cremation. As American society becomes more rootless (and less tied to one spot of land) and burial plot prices increase because of scarcity, cremation is much more popular. In the next decade or so, experts expect that nearly 60 percent of people will choose cremation.

The cremation process is pretty straightforward. A human body is loaded into what's essentially a very hot oven for between two and three hours. The five or so pounds of ashy, bony remains are then pulverized into a grainy dust and loaded in a receptacle.

From there, it's up to family member to decide how to use those ashes. Some people display the cremains in an urn on a fireplace mantle. Many others, however, honor their dead relative by scattering ashes in a special place.

Legal matters may complicate the act of spreading burned human remains in just any old place. Chucking great grandma's ashes at a public beach may delight her spirit, but other beachgoers standing in the surf might be a little peeved.

Keep reading and you'll see there are official laws on the books to prevent random acts of ash scattering at places like amusement parks. You'll also read about how not everyone heeds those laws. 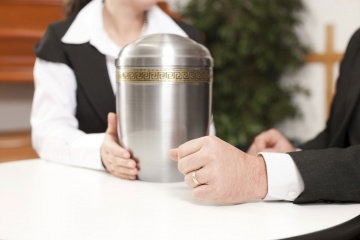 Cremains are sterile, but most people still don’t want to be in contact with them when they’re on vacation.
© kzenon/iStock/Thinkstock

You can scatter human ashes at a national park. To do it legally, however, you need a special permit. You can also float those remains in a public body of water, but regulations apply there, too. Typically, you need to be a significant distance from shore so that the ashes dissipate before reaching land (and other people), and you have to report your act to the appropriate government organization.

Skirting the rules and scattering ashes in an unapproved way is sometimes called wildcat scattering. For some people, it's an act of liberation and a way to deal with grief. For the people who encounter the remains, it's something else entirely.

It's not that cremated remains are dangerous. Because of the crazy high heat used to burn bodies (often more than 1,500 degrees Fahrenheit, or 815 Celsius), the final ashes are considered to be a sterile substance.

For a lot of people, though, there's a yuck factor associated with encountering human ashes (and sometimes teeth) in random locations. That goes double for folks who hit the amusement park for a day of fun and end up coughing on the windblown ashes of your mother-in-law.

Yet a lot of bereaved people can't help but want to take those ashes out for one last adventure, like an amusement park trip. And when it comes to amusement parks, some are more popular than others.

It goes almost without saying that Disneyland's public stance on ash scattering is flat-out denial. The official company line is that ashes have never been scattered there, it's illegal to do so, and Mickey Mouse and company would really appreciate it if you'd never, ever do it because the idea of dead people ashes and joyful Disney characters mixing on their grounds doesn't really make for the best marketing campaign.

So why would people defy Mickey's orders and insist on scattering ashes at the Disneyland and other amusement parks? Perhaps because those lively, fun places seem like the antithesis of the grim finality of death.

Looking the Other Way 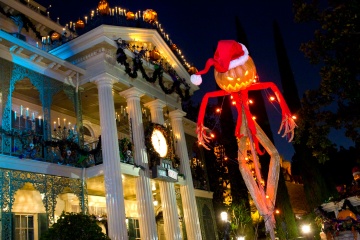 Though it’s long been rumored that Disneyland’s Haunted Mansion attraction is a favorite spot for ash-scatterers, the Disney company has always denied it.
© H. Lorren Au Jr/ZUMA Press/Corbis

In spite of laws against such behavior, otherwise law-abiding people can't seem to stop themselves from spreading ashes at amusement parks. Doing so generally means concocting a plan to spread the ashes surreptitiously so as to avoid detection by security guards.

In developing that plan, the bereaved often conduct a lot of online research at amusement park chat forums. On these forums it's clear that not only do a lot of people plot amusement park cremation ceremonies, but they really do carry them out, too.

As they chat with like-minded people, they'll ask whether certain parks allow ash spreading, and when they find out it's impossible to do legally, many pursue the idea, anyway. They'll ask other users how they managed to scatter ashes without getting caught and tips on how best to execute their own mission.

At Disneyland, attractions such as the Haunted Mansion and Pirates of the Caribbean seem to be particularly popular with parkgoers. They hop into the ride car, wait for the right moment and then let loose with the ashes.

Sometimes they get off scot-free, and the only evidence is a pile of ashes that is subsequently swept up and disposed of. Other times, security personnel witness people releasing powdery substances via surveillance cameras.

In those cases, amusement parks obviously take every precaution to ensure the safety of the riders. They'll shut down the attraction, attempt to find the person who did the deed and then thoroughly clean up the mess. In some cases, particularly on water rides, the evidence swirls away, never to be seen again (unless it clogs a water filter).

Every amusement park has security cameras, of course, and if someone's caught dumping ashes there's always a question of what to do with the offender. In many situations, security personnel may admonish the rule breaker but let him or her off without any sort of punishment. Most simply look the other way, opting for compassion over punitive action.

That said, you'll probably never see a news headline about an amusement park pursuing legal action against a grieving family. The negative public reaction would be predictable and not beneficial to the park's bottom line. So the act of jettisoning human remains at such parks will probably continue, on the sly and away from the public eye. So in spite of the rules, grandpa will have his endless rollercoaster rides, zipping around and around into eternity. Or simply disposed of by the park's cleanup crew.

I've always thought that coffins were creepy and also pretty pointless. You're already dead, so what's the point of going to the enormous expense of a fancy casket that goes into a hole in the ground? Cremation, on the other hand, is much more sensible but also not terribly practical. There are all sorts of research programs that need human remains. The things scientists learn from our dead bodies then help to better the lives of those left behind.

Why are mermaids on ships' prows considered good luck?
How Body Painting Works
What's really behind the 'ring test' for telling an unborn baby's sex?