Is there genocide happening in Darfur?

Browse the article Is there genocide happening in Darfur? 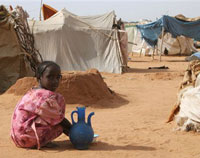 The Darfur region of Sudan has been in a state of crisis since 2003. Whether what's going on in the African province qualifies as genocide is a point of international debate. The U.S. government and many humanitarian groups say genocide is in progress. The United Nations says that people are committing war crimes in Darfur, but it doesn't rise to the level of genocide. It's difficult to know exactly what's happening in the region because the Sudanese government won't let the United Nations fully investigate; in fact, about a dozen aid workers trying to help the millions of Darfur refugees have been murdered doing their job, and Sudan refuses to allow U.N. peacekeepers to enter the country.

What's well known by the international community -- what has been known for several years -- is that Darfur is in a state of constant violence, with various militia groups committing inhumane acts against unarmed villagers on a regular basis.

The trouble has been brewing for decades. Sudan is a Arab-controlled nation, while the Darfur region is populated mostly by black Africans. The Arab people living in Darfur are primarily nomadic herders, and the Africans are mostly farmers. There have pretty much always been conflicts over land between the Arab herders and the African farmers. In the 1990s, these issues came to a head. African rebel groups formed and began attacking government buildings and representatives, claiming the Sudanese leadership was neglecting the Darfur region and was discriminating against the African Sudanese. In response to these attacks, over the next several years, Arab militia groups formed to fight the African rebel groups. Many experts believe the Sudanese government actively formed and supported these militia groups, although the government denies the allegations. By 2003, the conflict between the Arab militias and the African rebels was completely out of control, with the rebels attacking government targets and the militias attacking African villages and the constant violence forcing millions of African Sudanese to flee their homes in search of safety.

­ Exact numbers and details are nearly impossible to come by. Sudan will not allow the United Nations to take over the peacekeeping work now being inadequately handled by troops of the African Union, which has neither the numbers nor the funding to patrol a region the size of France. In August 2006, the United Nations passed a resolution stating that 20,000 U.N. peacekeeping troops will be entering Sudan. Sudan refuses them entry. In early October 2006, the president of Nigeria announced that he believes a genocide is occurring in Darfur. In late October 2006, the Sudanese government threw the U.N. envoy to Sudan out of the country. The millions of African refugees living in displacement camps in Darfur are increasingly cut off from aid in the form of food, water and medical assistance.

If the United Nations determines that what is happening in Darfur is in fact "genocide," it will have no choice but to send in troops. As of October 2006, the U.N. has not made this determination.

For more information on the Darfur crisis and related topics, check out the following links: