How are drones changing media coverage? 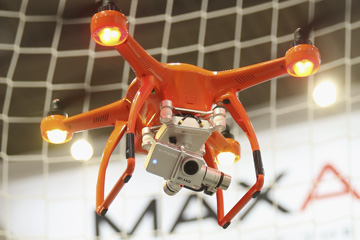 The media is often referred to in the United States as the "fourth estate." In the United States, the unfiltered information that journalists provide to the public serves as an important check on the country's three branches of government: executive, legislative and judicial. It also helps people stay up to date with the issues of the day, giving them the news they need to make informed decisions about their elected representatives. In fact, the strong hand that the media often plays in presidential and other elections also feeds the idea of the press as the fourth branch of government.

Whichever way you slice it, the business of media is rapidly changing. Technological advances have spurred a shift to real-time, digital platforms and spawned a slew of new tools that journalists can now use to reach audiences around the world. Among those tools are increasingly-available drone devices. These tiny flying machines have the power to provide a bird's eye view of news as it breaks, particularly in situations where it would be dangerous or difficult to get a reporter on the ground [source: Smith].

Whether it's gathering intelligence in a foreign war zone, monitoring disaster scenes or simply checking in on agricultural crops, one of the biggest benefits of drones is their ability to provide video and photo footage from hard-to-reach vantage points. Sure, a newspaper could rent a helicopter or plane to get shots of a wildfire in progress or send an intrepid reporter into the middle of a civil war. Using a $1,000 machine to do some of the heavy lifting, however, provides both financial and human cost savings [source: Smith].

Take, for example, CBS's use of a drone to capture the remote, largely abandoned Chernobyl nuclear power plant that still teems with harmful radiation after a 1986 explosion. Producers used a video camera strapped to a small quadcopter to capture what they called "a haunting postcard" from the disaster site that viewers might otherwise never see. Similarly, journalists at Russia Today were able to enhance their reporting on violent unrest in Ukraine with overhead, drone-collected video [sources: Smith, Cooke, Russia Today].

For the time being, however, the use of drones to capture news stateside faces a significant obstacle in the form of the Federal Aviation Administration. The FAA currently considers media requests to use drones for newsgathering in the United States on a case-by-case basis. The government generally gives the OK only in "sterilized" locations that are commonly far from any type of action that media would actually be interested in covering [source Schroyer].

The good news for newshounds is that the drone blockade appears to be fading. A set of proposed rules issued by the FAA would allow media groups to use small drones, as long as operators first pass an aeronautical knowledge test. In the meantime, a group of news outlets that includes the New York Times, CNN and the Washington Post is currently working with Virginia Tech to test drones for news purposes. Looks like the fourth estate is getting ready to fly the friendly skies [sources: Schroyer, Somaiya].